James Hunt’s 1976 title success was one of the most famous and tightly contested championship battles in the history of F1 – the story of the season has become so legendary that it became the subject for the Hollywood movie Rush.

Hunt’s F1 career was fairly short by modern standards but his talent never came into question – a series of podiums and even a win for the tiny Hesketh team drew the attention of McLaren for 1976, a season which yielded six wins and the World Championship. There were three more wins the following year, but as McLaren’s competitiveness faded so did Hunt’s motivation, and after an unsuccessful switch to the Wolf team for 1979 he retired from the sport.

A fiery character on and off the track he was perhaps an unusual choice to become part of the BBC’s commentary team, but he accepted the position and would commentate alongside Murray Walker from his retirement until his death in 1993. His frank and outspoken style was more or less the complete opposite of Walker’s, and some of Hunt’s one-liners and observations have gone down in F1 folklore. If James didn’t like you, if you were an unhelpful backmarker or if you were just a bit out of your depth, you’d get both barrels. Here are seven of his most brutal commentary moments.

René Arnoux was a frequent target for James as his courteousness when being lapped often left a lot to be desired. Here he is making it abundantly clear what he thinks of him after a collision with Gerhard Berger.

Sometimes F1 drivers stall their car. It might be because of a car problem, pressure, or just a simple mistake. It’s often a costly error though, and when Piquet stalled after a pit stop at Paul Ricard in 1987 James somehow manages to use it to make the case the he should retire from racing. That escalated quickly!

Philippe Alliot was a perennial back-marker who spent much of his career driving for the Larrousse team. He had a bit of a reputation for accidents, but even a minor off like this was all that was needed for Hunt to get in a few digs at the Frenchman.

There were some drivers that Hunt simply didn’t like. The luckless Jean-Pierre Jarier was one of them. A fast driver in his early career, Jarier was unlucky not to have won Grands Prix on more than one occasion, but by the end of his career had developed a bit of a reputation for being an unhelpful back-marker. True, on this occasion Jarier’s driving was pretty poor (even prompting lead commentator Murray Walker to criticise his driving), but Hunt really went at him with both barrels. I mean come on – “For being himself, he should receive a permanent suspension” – if that isn’t the most brutal commentary line ever, I don’t know what is!

Probably his most famous line, Hunt leaves nobody uncertain about his interpretation of Arnoux’s excuses. Murray Walker’s haste to change the subject only makes it funnier.

Andrea de Cesaris (or should that be ‘de Crasheris?’) was well known in his early years for being a bit accident prone, but by 1990 he’d developed into a solid pair of hands for many a midfield team. The old de Cesaris still popped up at times though, and after this brain fart at Imola, Hunt lets rip with another string of classic insults.

Ahhh, it’s Alliot again, but this time it’s a bigger incident and Hunt doesn’t let him off so lightly. Even though it’s clearly a stupid move on Alliot’s part, Hunt is so savage you almost start to feel sorry for him (and the other tail-enders in these clips) because he’s just so damn relentless with the insults! 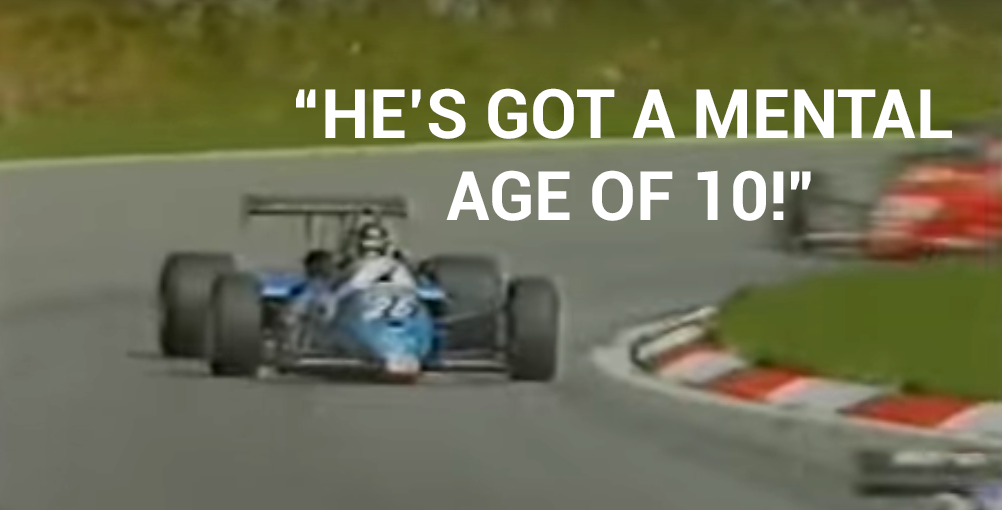