Johan Kristoffersson progressed through to the semi-final stages of the event as top qualifier, but his event almost became undone one corner into the first semi-final.

Petter Solberg got a better launch and as he tried to cover his teammate off, the two VWs made contact. Kristofferson was launched into the air and into the barriers, whilst Solberg suffered a puncture and heavy damage to the rear. It was a chaotic start, although perhaps the best bit was Tommy Rustad ploughing into the tyre barriers and trying to drive through it, to no avail.

After a red flag delay for circuit and car repairs, the race got underway again, with Kristoffersson winning and Solberg having to retire with car issues.

Though a problem after the race threatened Kristoffersson’s ability to start the final, he did take the start alongside semi-final two winner and main title rival Sebastien Loeb. Both EKS Audis, along with Kevin Hansen’s Peugeot and Niclas Gronholm’s Hyundai, also made it through to the final. It went, well, like this.

Kristoffersson’s third win of the season keeps him at the top of the championship standings, 14 points clear of Loeb, whilst Solberg’s disappointing event sees him drop to fourth behind Andreas Bakkerud.

The next round takes place in Hell, Norway, on 9-10 June. 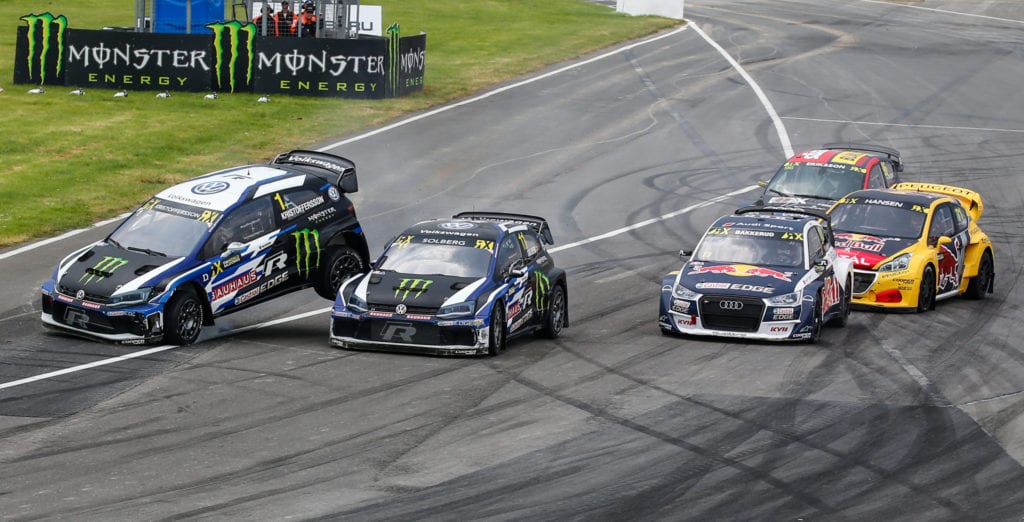