Johan Kristoffersson is a man who looks dangerously close to taking his second FIA World Rallycross title. This weekend at Loheac in France, he won his seventh (yes, that’s right, seventh) race of the season, equalling his record from 2017. With just four events left to run, he’s looking almost literally unbeatable.

Having said that, though, he wasn’t on pole for the final. In fact, he wasn’t even on the front row, having lost out to Mattias Ekstrom in his semi-final after the Swede made a perfect start. The other semi-final went the way of Andreas Bakkerud, who nabbed the fastest time of the pair, putting him in prime position to try and take his first win since Argentina 2016 – and more importantly, his first for Audi.

The usual suspects also all made it through to the final. Alongside Johan was Sebastien Loeb and bringing up the rear were Petter Solberg and Timmy Hansen. The three factory teams were poised and ready for a fight.

Getting off the line quickly is paramount in World RX, so much so that the quickest driver out of the blocks gets a ‘Supercharger’ award for their efforts. This weekend, it went the way of Bakkerud, as the Norwegian fended off his teammate to maintain the lead. The first driver to joker was Solberg who, having battled past Loeb early on in the race, saw this as the best time to take the longer route. Kristoffersson was forced to settle for third at this stage in the race, and not wanting to be stuck behind the Audi duo, jokered on lap two, bringing him out in fifth place.

Bakkerud was flying by this point but could not shake Ekstrom from his tail. Hansen decided to leave his joker late, and whilst the Peugeot was far from slow, Kristoffersson looked to be losing time stuck behind the Swede. Everyone held their breath throughout the last few laps, with neither Audi having jokered and the gap between Bakkerud and Kristoffersson too close to call who would come out on top.

The top three runners finally took their jokers on the last lap. It looked as though Ekstrom would drop down the order, but Bakkerud seemed to have the tiniest of margins for the win. The Audi and Volkswagen drivers were neck and neck as Bakkerud emerged from his joker, but it was Kristoffersson who just edged it. All he had to do from that point was maintain his lead for the last third of the lap, which he did with relative ease. He took the win from Bakkerud, with his Volkswagen team-mate Solberg stood on the third step on the podium after his attacking opening lap and inspired joker decision. Ekstrom dropped to fourth, followed by Hansen and Loeb.

This win means that Kristoffersson sits 59 points clear at the top of the drivers’ standings. He has already equalled his record of wins from last year and looks likely to surpass that in the remainder of the season. His closest rival, Bakkerud, can mathematically still win the championship, and certainly looked to have the pace to challenge at the weekend.

But the question for the rest of the field is: how do we solve a problem like Johan? 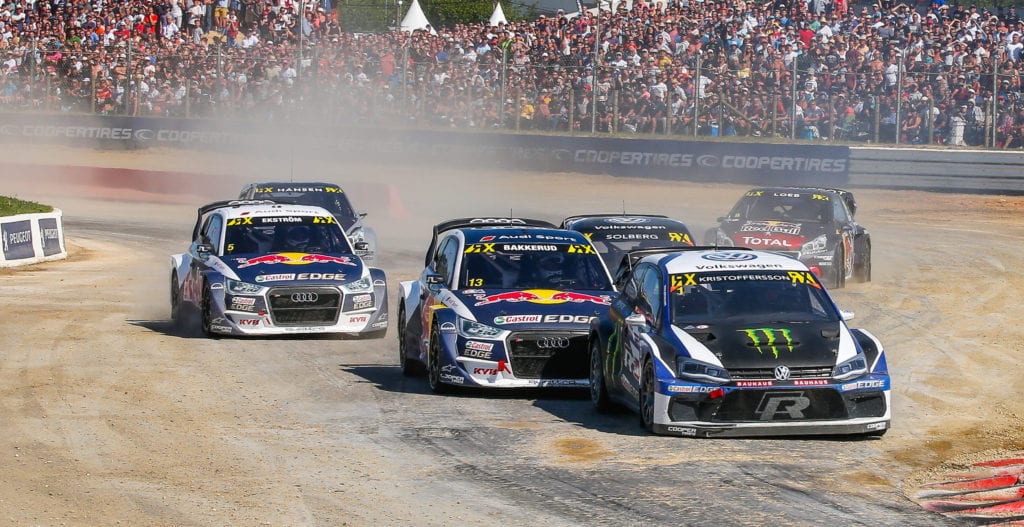