Kristoffersson Seals His Second World RX Championship At COTA With His Ninth Win Of The Season – WTF1
Skip to content
×
News , Rallycross

In news that may or may not shock you, Johan Kristoffersson won the inaugural World RX round at the COTA circuit in Austin. In doing so, his dominance was rewarded by the inevitable – the Swede claimed his second championship in as many years. Nine wins out of 10. Claiming the title with two rounds still in hand. Whichever way you slice it, there really has been no stopping Kristoffersson this year.

Only, he was almost beaten this weekend. Petter Solberg had well and truly looked like a man on a mission and was, for the first time this year, shading his Swedish teammate. Solberg took the win in the first semi-final, beating Kristoffersson to pole for the final. But this, we feel, probably didn’t bother Kristoffersson too much. By just his semi-final result alone, Johan had secured his second World RX championship. That’s right. He didn’t even have to win the final to do it.

But, for the first time in a while, he looked to be on the back foot going into the final. Solberg took pole, with Mattias Ekstrom alongside him. Johan occupied the second row of the grid with Sebastien Loeb, and Andreas Bakkerud was next to Timmy Hansen on row number three. This line-up, alongside a relatively unfamiliar track, meant that the win looked to be up for grabs for anyone on the grid.

Being quick off the line is essential in rallycross and this week it was Ekstrom who picked up the Super Charge award. Kristoffersson made a vital move up the inside of Ekstrom on the joker, with Hansen and Loeb following close behind, leaving Solberg to lead Bakkerud on the standard lap.

This mass joker lap spurred Solberg into action, forcing him into taking the alternative route on the second lap. It was essential that he made it through as quickly as possible to get out in front of the charging Kristoffersson – which ultimately, he did. The two jostled for the lead, but it was Solberg who emerged ahead.

Bakkerud was the only one left to joker, and whilst he had good pace, he didn’t look to be challenging for the win. When he jokered on lap three, he made it out behind the two Volkswagens and alongside teammate Ekstrom. The Norweigian kept his foot in to take third place. At this point, the order looked set.

Solberg drove well in the lead, creating a decent gap to Johan behind him. But, just as the race was drawing to a close, he ran wide, allowing Kristoffersson a free run at the lead. He didn’t need to be told twice. The Swede swept past, taking the lead and subsequently the win, despite his rear bumper hanging off after earlier contact. Solberg’s mistake cost him victory but he was still able to take second, with Bakkerud adding yet another podium to his tally in third. Contact between Hansen and Ekstrom dropped them both to the back, meaning Loeb took fourth. Hansen was later penalised for the incident, promoting Ekstrom to fifth.

It might not have been Kristoffersson’s most convincing win of the year, but when you have a safety net as big as he does, it doesn’t really matter. He has broken his own records this year and has been on the top step of the podium nine times out of 10. Will this reign of dominance continue for the remaining two rounds? Who knows. For now, let’s all just admire the phenomenal driving. 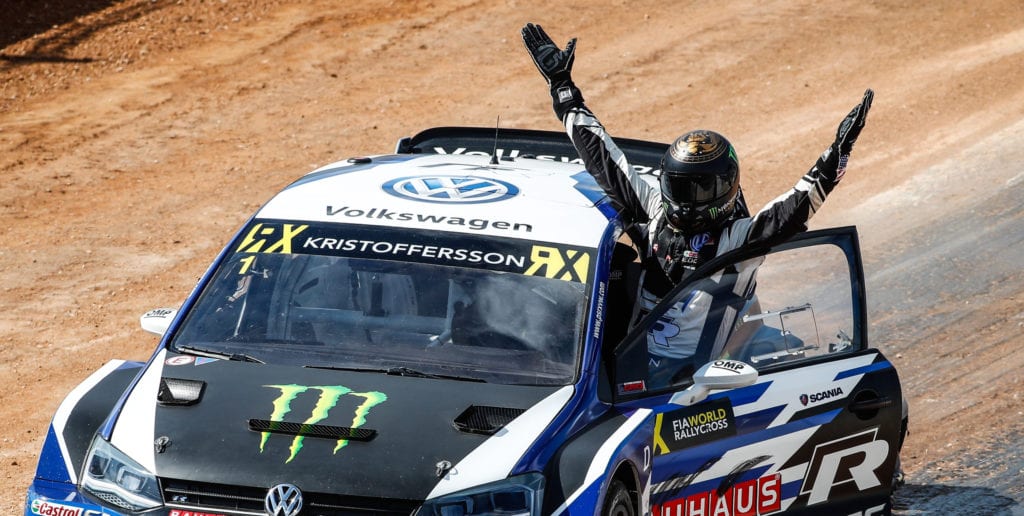