Lance Stroll Has Become The First Driver To Crash At Monaco This Year – WTF1
Skip to content
×
Crash , Formula 1

We’ve seen plenty of close calls and gentle taps at Monaco already, but Lance Stroll became the first driver to lose it in a big way.

With just over half an hour of the session to go he got slightly wide going into Massenet and ended up sliding wide into the barrier, coming to rest at the entrance to Casino Square. The crash meant an early end to Stroll’s session and also brought out the red flags so that the debris could be cleared up.

The loss of track time isn’t great news for Stroll. Along with Esteban Ocon he’s racing at Monaco for the first time, and getting the laps in is more important for a driver here than anywhere else.

It’s not like it’s a silly rookie error though, as that corner has claimed plenty of big names there in recent years – Fernando Alonso, Felipe Massa and Max Verstappen have all had similar accidents at the same corner. There’s no good time to bin it at Monaco (or anywhere, really!) but if you are going to have a crash there are worse times than during Thursday practice. 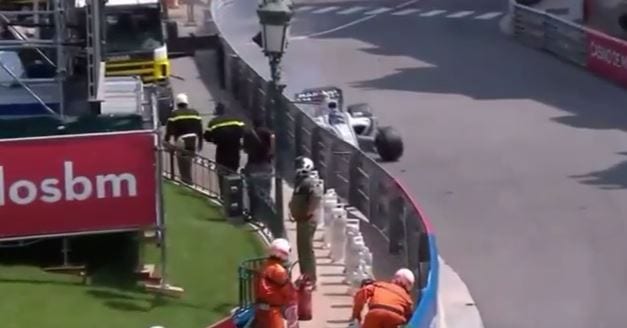