F1’s Virtual Bahrain Grand Prix was absolutely manic for a number of reasons, but also incredibly entertaining. Unfortunately, technical issues affected qualifying and then caused a bit of a delay while things were sorted out for the race, causing the race to be shortened from 50 per cent distance to 25 per cent.

Norris was badly affected by the problems and was left starting last on the grid. While waiting for the race to get sorted, he decided to whip out his phone while live on stream and ring up some of his fellow Formula 1 drivers for advice – and the resulting conversations did not disappoint…

George Russell got ever so slightly roasted but not as much as the F1 2019 game itself by Max Verstappen – tell us how you really feel! No wonder he didn’t want to compete.

Unfortunately, Lando’s issues didn’t end there. Another problem at the start of the race left his car competing as an AI ghost, and it wasn’t until halfway through that he actually got control of his car. In another highlight of the event, he then spent the last lap battling four fourth with Jimmy Broadbent in a fight which went right down to the last corner.

The two collide in the closing stages! 💥

It wasn’t just Lando having issues, either. Anthony Davidson somehow ended up racing in the wrong lobby and did the entire race on his own against AI cars before he realised, the actual race had two separate massive accidents before they’d even reached Turn 1, and Johnny Herbert simply said ‘screw it’ and cut the first corner entirely to take the lead on the first lap.

The race was comfortably won by Renault junior driver Guanyu Zhou, with Stoffel Vandoorne second and pole-sitter Philipp Eng third. Nico Hulkenberg and Esteban Gutierrez also had a tremendous battle for position down the order.

Overall it probably wasn’t the greatest advert for the plus points of sim racing and esports as a serious form of competition, but holy crap was it entertaining – and arguably, given the uncertain times we’re all currently living in, that’s surely the most important thing. 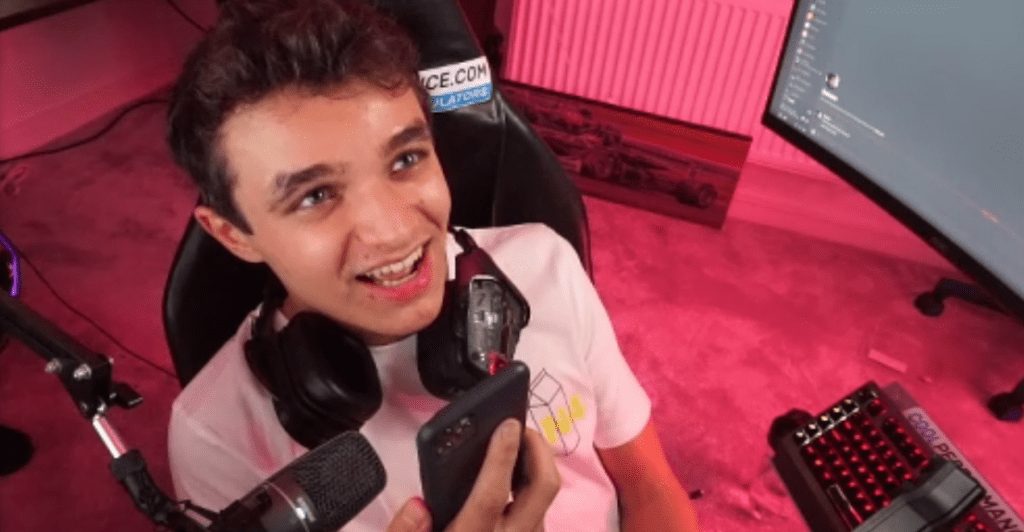