After George Russell crashed under safety car during the Emilia Romagna Grand Prix, marshals were deployed to help clear up the debris that had been left behind. In a series of terrifying onboards, you can see the drivers attempt to un-lap themselves when they are greeted with marshals still on the track.

In a post by u/BlackGT86 on Reddit, a terrifying series of onboards have come to light showing how drivers were told that the lapped cars could now overtake before realising that marshals were still on the track in a move Vettel called “very, very dangerous”.

As per the FIA Sporting Regulations “if the clerk of the course considers it safe to do so, and the message “LAPPED CARS MAY NOW OVERTAKE” has been sent to all teams via the official messaging system, any cars that have been lapped by the leader will be required to pass the cars on the lead lap and the safety car.”

This was what can be seen from the various onboards from the likes of Lance Stroll, Sebastian Vettel, Kimi Raikkonen and Romain Grosjean.

Raikkonen is the first of the six drivers who have been told they can un-lap themselves, and notices the double-yellows that are being waved and signalled and slows for the accident in Turn 10 and 11. He checks his surroundings and speeds back up when safe to do so. His teammate Giovinazzi is following behind and is able to replicate what Kimi has just done in front of him.

Next up is Latifi and Grosjean, with Grosjean’s engineer warning him it is double-yellows at Turn 10 and 11 as there is still debris on the track.

“Okay, it is a bit dangerous to leave marshals on [the track],” he replies back to his engineer.

Finally is Vettel and Stroll. Both drivers have clean air in-front of them so are doing quicker speeds, however his engineer does not inform him about the double-yellows and as a result Vettel does not slow until he sees the people on track.

“Tell them to watch out, marshals are on the track. It it very very dangerous, tell them marshals to get out of the track.

Stroll’s onboard is the worst and most uncomfortable to watch. He was told to “push” by his engineer and also had no prior warnings about the issues going on in Turns 10 and 11. As a result he approaches the corner at almost full speed and comes astonishingly close to the marshals who are still sweeping up on track.

Some seriously shocking onboard videos and as of yet there has been no update or investigation from the FIA. 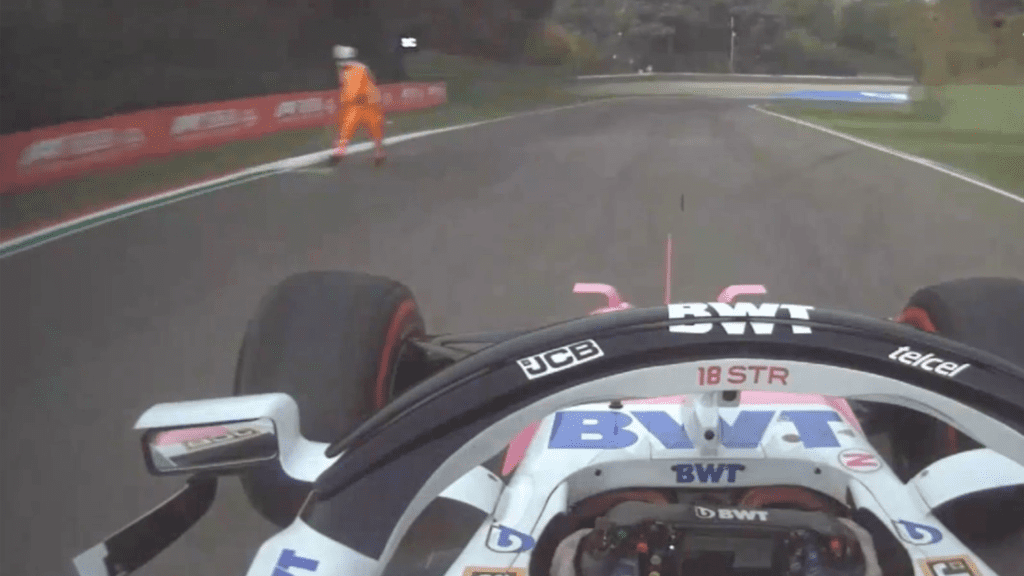