Wow. What a qualifying session. After being heavily delayed as a result of multiple red flags and what felt like half the grid making contact with the walls, we finally have our pole sitter for the Azerbaijan Grand Prix. Charles Leclerc in his Ferrari earned himself back-to-back poles and will start tomorrow’s race from that first grid spot.

Lewis Hamilton put an end to any doubters and will start alongside Leclerc, with Max Verstappen closely behind in third. Pierre Gasly also matched his best qualifying results for a fourth place start.

Tomorrow’s race has all the ingredients to be one to remember!

LANCE AND GIO BRING OUT THE RED FLAGS

We’ve seen mistakes made all weekend, especially at Turn 15, with the likes of Charles Leclerc and Max Verstappen crashing into the wall during practice. Unfortunately, it only took four minutes into Q1 for another car to make contact with the same barrier and bring out a red flag.

Aston Martin’s Lance Stroll got out of shape going into the corner, slammed his car into the barriers and demolished the front-right of his car. As a result, the session was red-flagged. However, the delayed session helped George Russell in his Williams, who was undergoing some serious work to get his car ready for qualifying.

Williams needed to change Russell’s power unit due to a water pump leak that brought his FP3 to a premature end earlier in the day.

As soon as we got back racing, it was stopped again for another crash at Turn 15. This time it was the turn of Antonio Giovinazzi in his Alfa Romeo.

In the end, Q1 lasted 40 minutes and saw Nicholas Latifi and both Haas cars eliminated, as well as Stroll and Giovinazzi. McLaren’s Lando Norris was also in trouble and will be investigated for possible infringement of red flag procedures.

Q2 was sensational, with the gap between the top five being separated by +0.034s. Verstappen was quickest, with Checo locking out a Red Bull 1-2 with Lewis Hamilton in third. Even Yuki Tsunoda made it through to his first Q3 appearance.

However, McLaren’s Daniel Ricciardo ended the session early and prevented Sebastian Vettel and Esteban Ocon from improving their times. The Australian made contact with the barriers in a very uncharacteristic crash and brought out the red flag with 90 seconds left on the clock.

Drama, SO MUCH DRAMA.

What a final qualifying session. It had almost everything!

Mercedes were first out, with Valtteri Bottas helping give Hamilton a tow around the track. Leclerc went out for his sensational lap and placed his Ferrari on provisional pole, not something we expected coming into Baku! The 1:41.218 was blisteringly quick and proved unbeatable as the final session ended under red flags too. This will be his ninth pole position and means he now has back-to-back poles after his Monaco achievements.

Elsewhere in the top ten, Pierre Gasly looked to set a wicked time. He went fastest in his first sector, but a poor decision from AlphaTauri meant that Yuki Tsunoda was just too far away to give Gasly a good tow in the final part of the lap. He crossed the finish line in fourth, which is where he’ll start tomorrow.

It’ll be a huge disappointment for most of the top 10, though, as Tsunoda binned it in Turn 3 with moments to go and ruined countless laps. There’s a suggestion that Carlos Sainz might have been spooked by the smoke caused by Yuki’s car, which is why he lost control of his Ferrari into a nearby escape road. Ferrari will be hoping there’s no serious damage to Carlos’s car.

The driver that seemed to lose out most to the red flag was… you guessed it. Max Verstappen. The Red Bull driver was fastest in the first and second sector and looked set to steal pole from Charles before he was forced to drop off. It’s like Monaco deja vu.

Norris finished in sixth but is under investigation. Sergio Perez, who was a favourite for pole, will start seventh, with Tsunoda, Fernando Alonso and Bottas rounding out the top ten.

Outstanding qualifying and WE CAN’T WAIT FOR THE RACE TOMORROW. 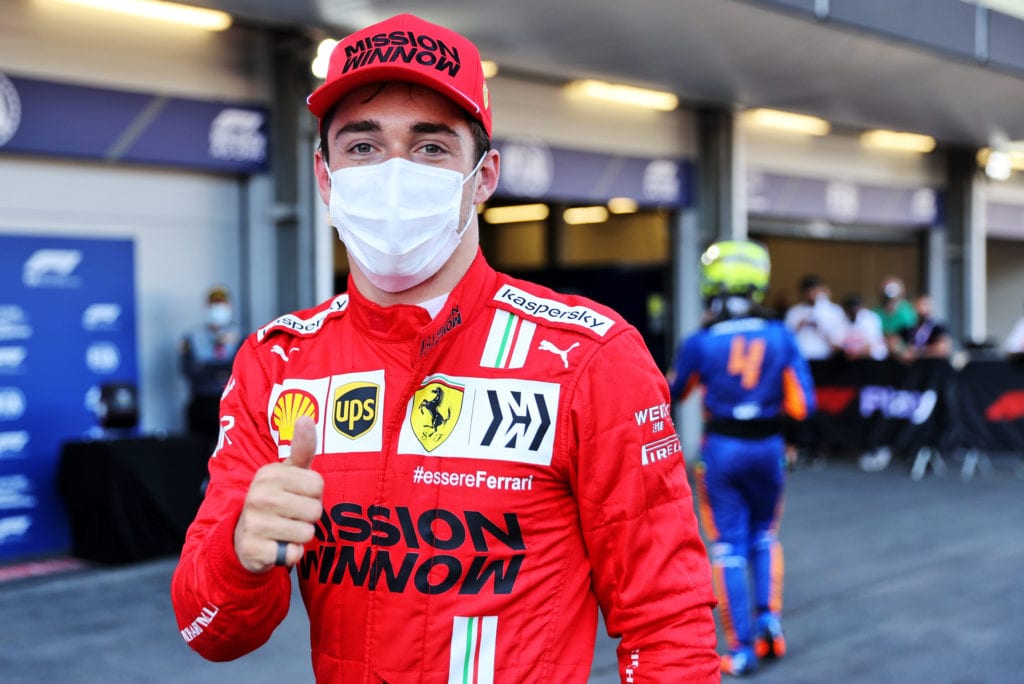