Leclerc Holds His Nerve To Win Italian GP For Ferrari

Leclerc came under enormous pressure from Mercedes pair Lewis Hamilton and Valtteri Bottas, but used the power of the Ferrari engine and kept his hard tyres in shape to send the tifosi into delirium at Monza. The gap between Leclerc and Bottas stood at 0.835 seconds after 53 laps, while Hamilton finished 35s adrift after a late pitstop to take the fastest lap away from his team-mate.

The Monegasque’s victory was doubly-important for Ferrari, as Sebastian Vettel finished in 13th after a dismal race. The German spun at Ascari on lap 6 and tipped Lance Stroll into a spin while recklessly rejoining. For his misdemanour, Vettel received a 10-second stop/go penalty that ruined any chance of a points finish.

Hamilton was the first of the Mercedes to attack Leclerc, believing that he had the upper-hand over Leclerc on the soft tyres. He was the first man to stop on lap 19, after telling his team that the overcut wasn’t a viable option against Leclerc. Ferrari waited one lap longer for Leclerc, fitting the hard compound to prevent the excessive wear seen in Belgium last Sunday. Bottas stayed out and tried to open out a gap to the chasing pack, pitting on lap 27 for mediums and sitting an ominous 7 seconds behind the battling Leclerc and Hamilton.

The duel was feisty between the pair, Hamilton being forced onto the run-off at the Variante della Roggia on lap 23 when squeezed by Leclerc. The stewards investigated the issue, but deemed it a non-event. They did, however, show Leclerc the black-and-white flag for skipping across the sleeping policemen at Turn 2 under more severe pressure from the five-time world champion on lap 37.

Hamilton’s mistake at Turn 1 five laps later proved to be more costly. With his medium tyres falling away, and Bottas scything into his advantage, he had to slalom through the polystyrene boards on the escape road and fell to third. That opened up Bottas to close in on Leclerc and an initially alarming rate. But, lap after the lap, the Ferrari used its power advantage to keep ahead. The 21-year-old’s task was made slightly easier by a few mistakes by Bottas in turbulent air, but let that take nothing away from a supremely confident drive. Hamilton has extended his advantage by two points at the head of the championship, while Leclerc has passed Vettel and Max Verstappen to move into third place. Has Ferrari got a new team leader?

Renault had its best day since the team’s 2016 reformation with fourth and fifth place, taking 21 points out the deficit it had previously held to fourt- placed team McLaren. Daniel Ricciardo’s fourth place was the Australian first top 10 finish since Silverstone, while Nico Hulkenberg held off Red Bull’s Alex Albon to keep a first top five finish for over a year.

Albon had a bang with Carlos Sainz early in the race, but shrugged off any troubles to finish in the top six once again. Sergio Perez was another driver who worked diligently to overcome adversity, turning a 17th place start to a seventh place finish and salvaging the points Stroll could have had before his clash with Vettel for Racing Point.

Verstappen couldn’t quite make the progress he would have liked from the back of the grid, having to change his front wing at the end of lap 1 after tagging Perez at Turn 1 as he was caught out by the midfield dramatically bunching up. Antonio Giovinazzi added to the Italian pride with ninth, ahead of young Valentino Rossi fan Lando Norris.

Kevin Magnussen, Daniil Kvyat and Carlos Sainz were the three retirements over the course of the race. Sainz had to retire after his pitstop on lap 27 with a loose front-right wheel when running in the points. One of the drivers to feel a real benefit from the Spaniard’s stoppage was Kvyat, but an oil leak brutally dumped him from sixth place. Magnussen stopped in the garage in a lowly 14th towards the end.

After the tragedy of Spa and the muted celebrations for Leclerc’s first F1 victory, the festival of noise and colour that greeted his second – and first at Monza – was a welcome and stark juxtaposition. 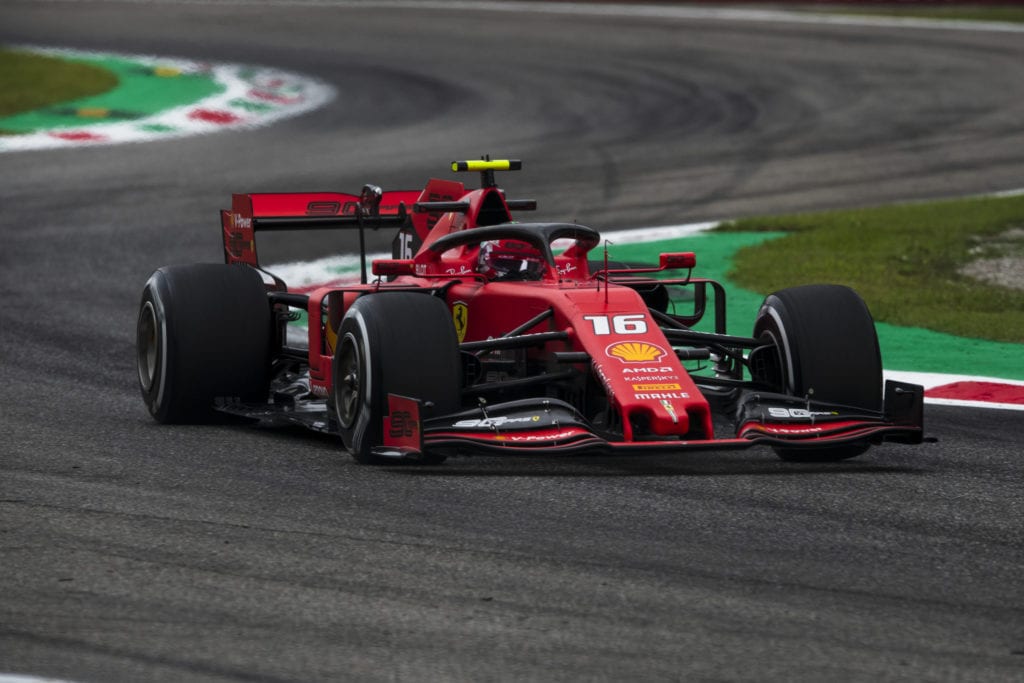