Leclerc Says He And Vettel Need To Tone Down Their Aggression When Battling – WTF1
Skip to content
×
Formula 1 , News

Ferrari boss Mattia Binotto refused to publicly chew out Vettel and Leclerc post-Interlagos, preferring to deal with the matter at the team’s base in Maranello with a calmer head and more rationalism. But, before that, both drivers did issue apologies to the team for throwing away a likely podium finish.

It is understood that talks have been held between the senior figures and the drivers, and the matter has been resolved. For now, at least. Replays of the collision showed Vettel reacting badly to Leclerc’s brilliant pass down the inside of Turn 1 on lap 66 of 71, the German unwisely drifting over to his left while trying to outrun Leclerc on the approach to Turn 4 and touching the Monegasque’s right front wheel. It left Vettel with a puncture, and a very angry German radio message, while Leclerc suffered a broken right front wheel and suspension.

The dynamic between the drivers at Ferrari in 2019 has been scrutinised, with Leclerc seemingly rocking the boat – while his predecessor Kimi Raikkonen… didn’t. In the farcical Italian Grand Prix qualifying session, Leclerc did not honour the agreed plan to give Vettel the tow on the final ‘run’ – so the German seeked revenge in Russia and did not wave the 22-year-old back into the lead in the opening stint, therefore going back on a pre-race agreement.

Speaking in the Thursday press conference ahead of the season-ending Abu Dhabi Grand Prix, Leclerc admitted that a change of approach is necessary for the good of the team.

“We looked at it and I particularly looked at it obviously to try and understand how we could have made things better. I think it was very unfortunate: first of all because the touch was extremely small and had a big drama after that. So that was a little bit unlucky. But as a team I think we probably should try to be a bit less aggressive between each other for these things to not happen again. For the team it is not good, for everyone that is supporting us it’s not good. So [we need to] try for it to not happen again.”

However, Leclerc is confident that the pair will be allowed to race, with the team currently unwilling to copy Force India’s block on Esteban Ocon and Sergio Perez bumping wheels after the 2017 Azerbaijan and Belgian Grands Prix. He reasoned that Vettel was wrong to move over before completing the pass, but accepted that he could have been more lenient and given more space before adding that the two have agreed that the best thing to do is to move on.

“I think this will not change. We will be able to race together. Obviously Seb and myself are very competitive. We both want to win but also we need to find the right compromise. We are also racing for the same team. Apart from that I don’t think there’s much we can do obviously. As I said, the consequences were huge in the last race. If you look back at the contact, it was very, very small. It was unfortunate but again we will make sure it doesn’t happen again.

“I think Seb should not have gone to the left and he knows it. And I probably could have done a better job of avoiding him going to the left. So both of us have a bit of responsibility. But I think the most important [thing] is that everything is clear. We have sat down and we move forward.”

There is no comment from Vettel yet, as he is arriving late to Yas Marina on Thursday after the birth of his third child.

Good to see, all in all. Besides, team orders are so not Ferrari. 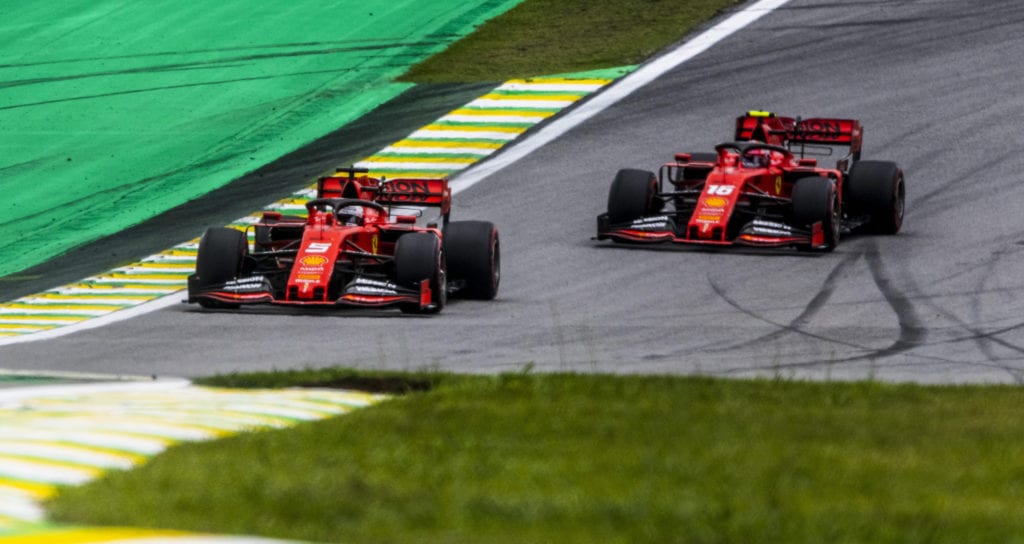