Leclerc Was Given A Strange Award For His Mistake In Turkey – WTF1
Skip to content
×
Formula 1 , WTF

Leclerc Was Given A Strange Award For His Mistake In Turkey

We’ve all had embarrassing moments in front of our friends and families that they never let us forget, but someone has gone one step further and presented Charles Leclerc with an award for his last-lap mistake at the Turkish Grand Prix.

The ‘Tapiro d’Oro’, which is literally translated to ‘Golden Tapir’, is given to celebrities, politicians and sports stars who have been publicly humiliated or defeated. The award is then presented to them by the Italian media outlet Striscia la Notizie.

After Leclerc’s error at the Turkish Grand Prix, which saw him go from a guaranteed third-place to fourth and hand a podium finish to his teammate Sebastian Vettel, he had an explosive post-race outburst on team radio calling himself “fucking stupid”.

The unusual award was given to Leclerc at the Ferrari base in Maranello, where he graciously accepted the accolade.

“The race went well and I threw everything away at the last corner,” Leclerc said when being gifted this huge gold statue of a tapir.

“I was wrong and I vented on the radio with my engineers, you heard everything. These things happen, but they must be a starting point to grow and come back stronger.”

He then went to talk about how Lewis Hamilton, who recently secured his seventh drivers’ title, and how he was “very strong” and “nice” before clarifying that they “wouldn’t be going on holiday together”.

Pictured above is the trophy in all its glory. Ferrari themselves have won this award twice in 2017 and 2018 for their failed F1 seasons.

Honestly, 2020 is bringing us some of the weirdest F1 moments and we’re kind of here for it.

Valerio Staffelli, who is the Italian personality giving Leclerc the award in that terrifying face mask, has previously had to confront celebrities and politicians to give them the Golden Tapir, with someone previously breaking Staffelli’s nose in a reaction to receiving the trophy. 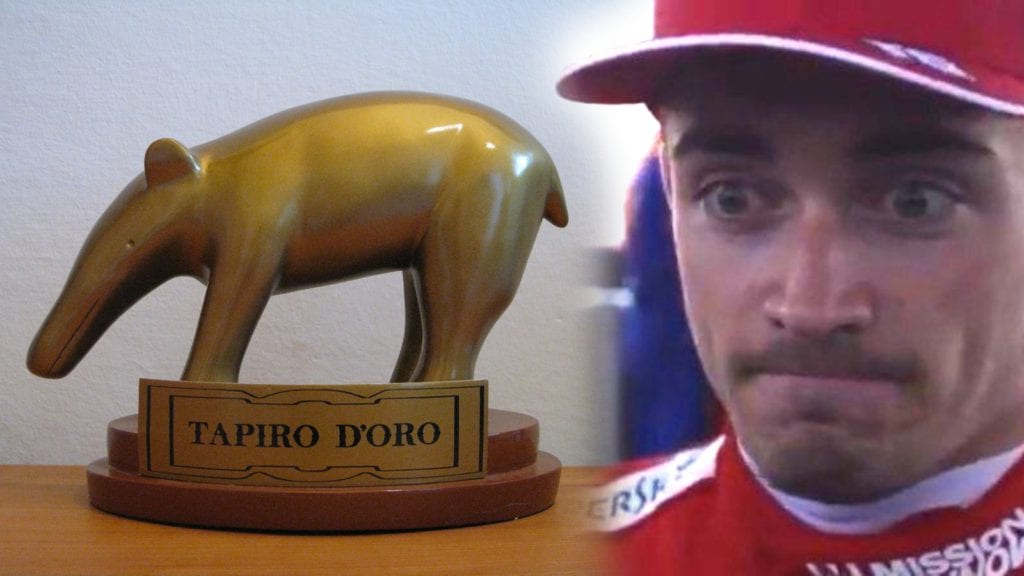