Despite losing the lead at the start, Lewis Hamilton was able to overcome Sebastian Vettel to take the win by the end of the race, and went wheel to wheel with the Ferrari driver a couple of times along the way.

But despite the sluggish getaway and uncertainty over his strategy Lewis said that the battle he had with Vettel was exactly the sort of thing the sport needed. Speaking after the race he said:

“Seb was so fast ahead, it was such a push to try to keep close to him and not let him pull away. It was just the rawest fight I can remember having for some time, which I loved. This is what the sport needs to be every single race and this is why I race, what got me into racing. “To have those close battles with him, a four-time champion, is awesome.”

One of the highlights of the race came when Vettel emerged from his final pitstop alongside Hamilton and the two went wheel to wheel in the first corner. Vettel impolitely nerfed Hamilton across the run off in order to stay ahead in much the same way as Hamilton has done to Nico Rosberg on a few occasions in the past.

But despite feeling annoyed about it at the time Lewis still enjoyed the fight. He said:

“In the end we came out so close together which was very, very close into Turn 1, I gave you [Vettel] space otherwise we would have touched. It was close, it was cool. “In the heat of the moment it’s difficult to know from the outside, I felt like I ran out of road but was alongside. But it was how racing should be – I love it, I wouldn’t change it for the world.”

Despite being fighting each other for the championship there’s a bit of a love-in going on between Seb and Lewis at the moment. Hamilton added that he thought Ferrari had done a “phenomenal job”, while despite losing out in the final stint Vettel was happy to give credit to his rival:

“I thought it would be more difficult for him the longer I tried but then I had no tow and he sailed past. He managed a really good exit and was really quick in last sector and managed to win the race. Well done to him, he won it fair and square and you can’t take it away from him.”

Dawww, you guys! It’s great to see two title rivals enjoying their racing and not constantly snapping at each others throats and looking for other people to blame. We are only five races into the season though – I’ll be amazed if they’re still being this pally five races from the end of the season!

Did you enjoy seeing the two of them battle it out for the win? Was Vettel’s move on Hamilton ok? Did DRS kind of spoil the fight? Let us know in the comments! 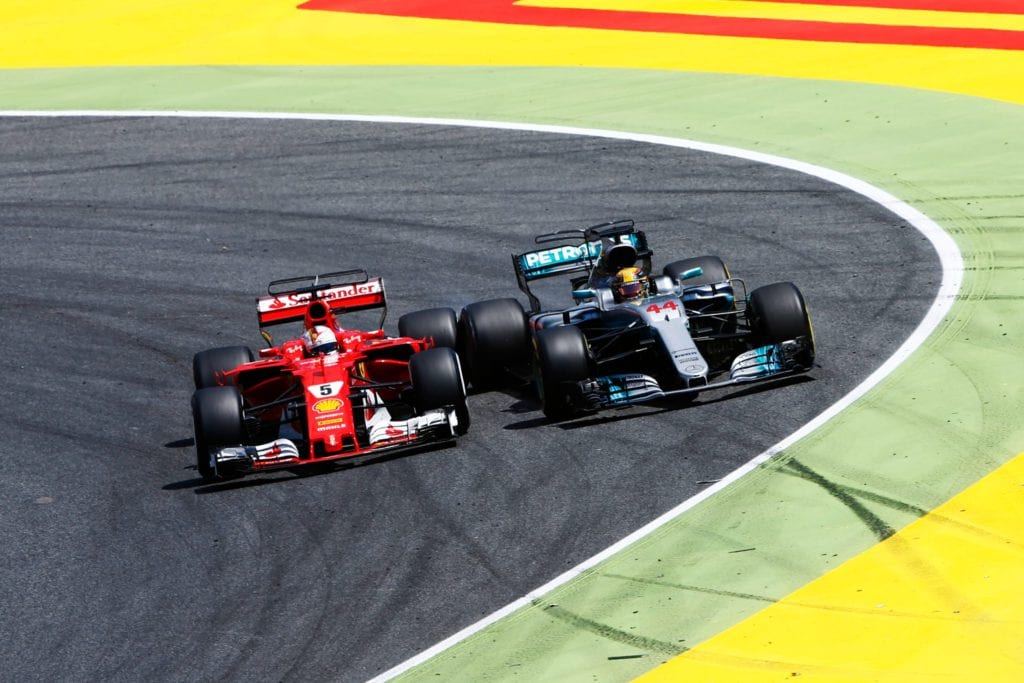