Lewis Hamilton And Nico Rosberg Bumped Into Each Other On The Streets Of London - WTF1
Skip to content
×
Formula 1 , Fun

The city of London is an absolutely vast place with millions of people walking its streets every day, so that makes the surprise meeting of two F1 world champions a pretty amazing coincidence.

Hamilton explained during the FIA press conference on Friday that he was running around London not too long ago when he happened to bump into an old friend.

He was doing a pretty long route around central London (he went from Covent Garden to Battersea and then by Parliament) when someone started running behind him.

Obviously, you’d think that was a bit weird and look behind you, which Hamilton did, and he saw his old team-mate and 2016 champion Nico Rosberg.

Yep, Hamilton said Rosberg must have been passing through London and happened to spot Hamilton running, so hopped out of his car and had a chat.

Hamilton was replying to a question asking if he’d caught up or talked to Rosberg at some point since his retirement bombshell at the end of 2016, saying that’s the only time they have.

🏃🏽 😮 @LewisHamilton tells the story of when he was ambushed while jogging in London… by a *very* familiar face#SpanishGP @MercedesAMGF1 pic.twitter.com/giTwA8jQ9W

“We have not. I think that’s the… actually the one time I’ve seen him I was running through the streets in London. It’s kind of a strange… running from Covent Garden all the way down to the Thames, then down to Battersea kind of area and back up near Parliament.

“I was just running on a random street and then there was a crowded sidewalk, but someone started running behind me and I looked back and it’s… Nico. He’s obviously seen me on the road as he’s going through somewhere in London and he’s jumped out (of the car) and run alongside me so we stopped and had a chat for a bit there. That’s the first time that I’ve seen him since.”

What a funny coincidence, two F1 world champions randomly bumping into each other on a random London street.

It’s surprising they haven’t stumbled across each other more often, considering they live in the same apartment block in Monaco. 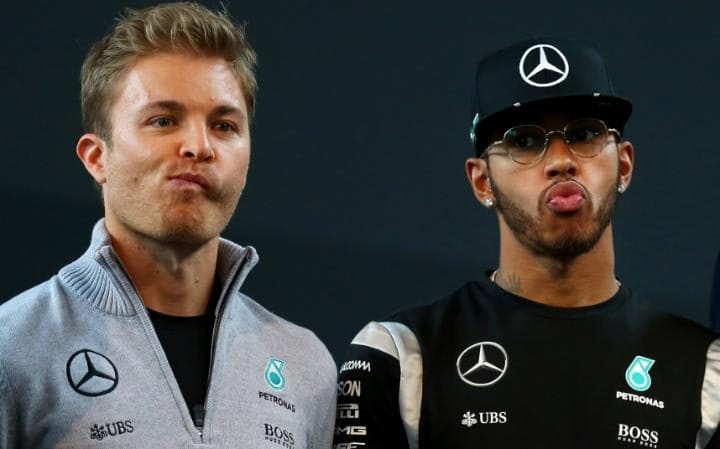