Lots of team radio messages can be emotionally charged, filled with F-bombs, criticisms of other drivers, or even team strategy. Until now, the best team radio was probably Sebastian Vettel’s rant against Charlie Whiting in Mexico a couple of years ago, but this – this is on another level.

After finishing down in 13th place, Trident driver Arjun Maini sounded like he was on the verge of tears as complained of a lack of support – and even saying that he doesn’t want to race in the championship any more.

In case you couldn’t hear, this is what he appears to have said:

“”I swear you guys don’t support me at all, I do everything, every fucking thing I can, every fucking session. You can’t do this to me mate, I have no fucking power out of the corner, why doesn’t anybody fucking believe me?”

It’s hard not to feel for him. At first, it sounds like an angry driver struggling to deal with the inevitable bad days of motorsport and rage quitting on live TV, but it seems like there’s more to it than that. In Saturday’s feature race, Maini’s teammate (and fellow Haas junior driver) Santino Ferrucci was asked to pick up the pace. His response? “I could if you gave me a better car”.

Edit: It turns out Maini’s comments were directed at the series itself and not his team. It’s part of a growing frustration amongst F2 drivers for the poor reliability of this year’s new F2 car. 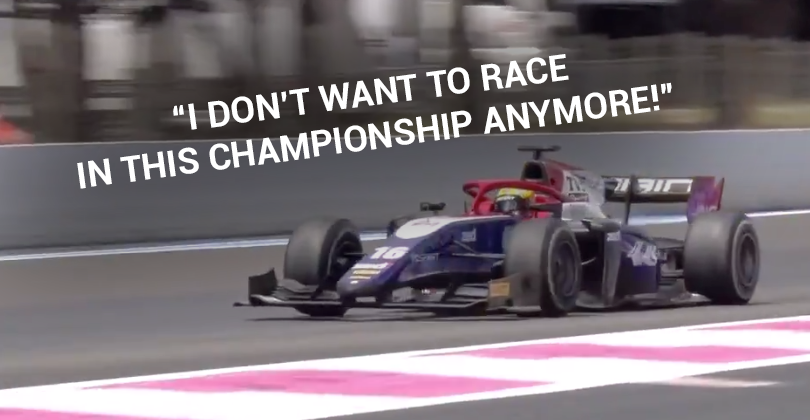