Look At This Adorable Kid-Drawn Livery For The Rolex 24 At Daytona – WTF1
Skip to content
×
Design , Fun

Era Motorsport have hand-picked this super cute design to cover their LMP2 car for the first race of the season. The colourful livery was drawn by a six-year-old from Canada, and even features a lightning bolt. We’re also loving that this endurance car isn’t a predictable red, white and black livery!

Six-year-old Owen, from Ontario, Canada, entered the livery competition put on by Era Motorsports last year. Although the design was intended for use at the Petit Le Mans, schedules changed and now his design will be seen worldwide during the 2021 Rolex 24 at Daytona in a one-off opportunity. Amazing work!

Alongside the three bold colours, the livery also features a striking lightning bolt. Why the lightning bolt you ask? “Thunderbolts are cool,” Owen said in his submission form. Damn right.

“Thank you for this contest,” his heartwarming note read.

“My name is Owen and I am 6¾. My favourite things are racing and hockey. I am learning to drive on a racing simulator.

“This was fun because my grandpa, dad and me all like racing and we were stuck at home during COVID.”

Owen even drew a self-portrait and the end of his submission letter which we think definitely helped his case.

As well as having his artwork on the car, both Owen and his dad have been invited to attend an IMSA event as guests of Era Motorsports – once COVID restrictions have been lifted and fans can get back in the paddock again. *fingers crossed*

We’re sure that graphic designers around the world are beginning to panic as this is the second example in a couple of months that a kid has come up with a livery or helmet design that has been used in professional racing.

Last year, for the 2020 British Grand Prix, F1 driver Lando Norris raced with a helmet that was designed by another six-year-old: Eva. As well as having the coolest story to tell when she grows up, her helmet concept was adored by fans around the world and even won a vote by the WTF1 community for ‘best lid design for 2020’.

Perhaps the drivers at Era Motorsports should reach out to Eva to get some special matching helmets designed. What do you think? 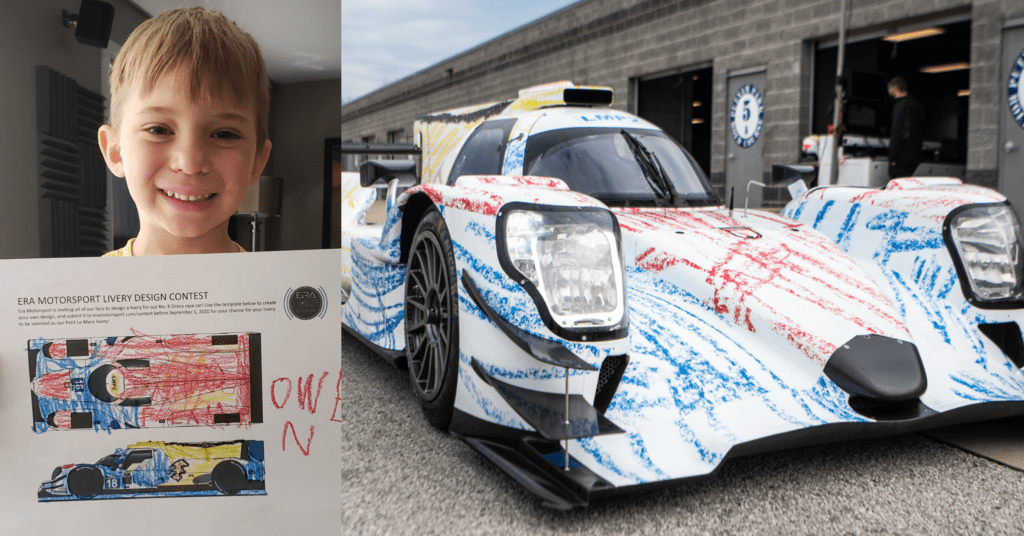