The team’s Season 5 challenger is officially called the Mahindra M5Electro but ahead of the first race of the season in Saudi Arabia this weekend, the team held a vote to give names to the individual cars.

Allowing public votes is always going to be a risky business – after all, Sergey Sirotkin is now officially the best driver of 2018 – and Mahindra’s poll was no exception. The No.64 car driven by Jerome d’Ambrosio has been named ‘Falcon’…

The national symbol for Saudi Arabia might have raced against one @FIAFormulaE driver on Monday, but this Falcon will race against all 21 drivers for #Season5. That’s right, the #M5Electro64 has been named ‘Falcon’ for the 2018/19 season. Watch it fly this Saturday in Riyadh! pic.twitter.com/OdTKcinMwq

That’s a pretty cool name, but the No.94 car (driven by Felix Rosenqvist this weekend, Pascal Wehrlein for the rest of the season) has gone down a different, more hilarious route…

And now for the grand unveiling of the name of the 2018/19 #M5Electro94. Step aside Boaty McBoatFace. The #MahindraRacing public voted and we delivered… Say hello to Electro McElectroFace! pic.twitter.com/h3XcfTXFIe

Yup, Electro McElectroFace, in honour of the famous Boaty McBoatface.

However, unlike Boaty McBoatface, Mahindra has actually honoured its vote and the name will stick with the car throughout Season 5. Props to the team for actually going with it! 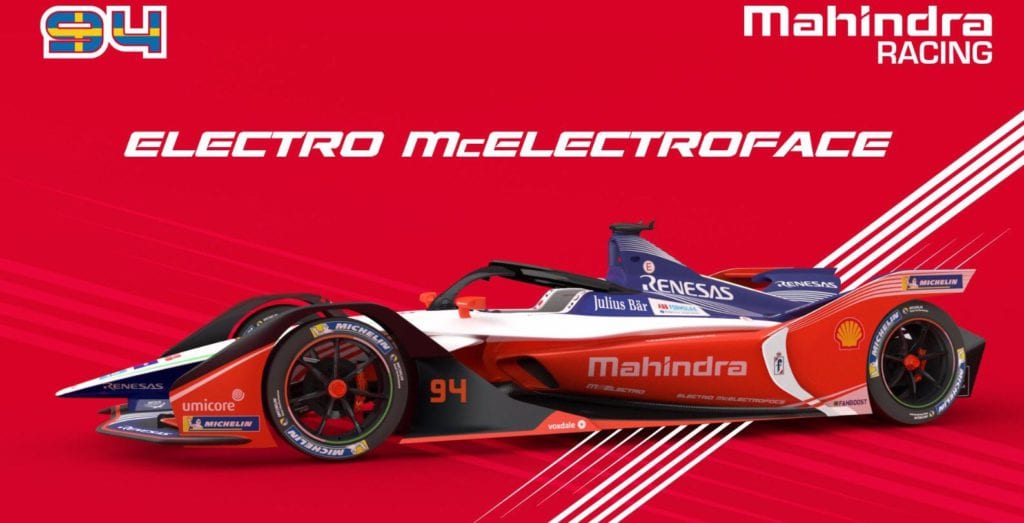