Marquez won his ninth race of the season with a dramatic last-lap pass on Fabio Quartararo in Thailand and with it, took his eighth world championship, and his sixth in the top class. Since he moved up to MotoGP in 2013 he’s only failed to win the title once (in 2015) and, at just 26 years old, is well on course to beat not only Valentino Rossi’s records, but Giacoma Agostini’s as well.

Speaking of Rossi, the Italian had some pretty wild post-race celebrations, something Marquez is now starting to do (hey, you’ve gotta keep the process of winning championship after championship fresh somehow, right?).

His whole weekend had the theme of ‘potting the 8 ball’ to win his eighth title and after winning the race, that’s exactly what he did. Incredibly, a pool table had been set up trackside, complete with a referee to chalk his cue for him. It’s one thing to plan a t-shirt or something, but a whole pool table!?

Thankfully, Marc was able to sink the ball (it was a pretty straightforward shot, to be fair!) and carry on his celebrations, which included changing into a special celebratory helmet.

Let the celebrations begin! ⠀⠀⠀⠀⠀⠀⠀⠀⠀ The eighth feels just as good as the first after an incredible season from @marcmarquez93 never finishing a race lower than second. #8ball 🎱

If only we saw this sort of thing in F1. Instead, when Lewis Hamilton wraps up his sixth title (probably in Mexico again), we’ll probably just get a few donuts while he holds the Union Flag. That’s cool, but it’s not quite playing-pool-on-the-slow-down-lap cool. 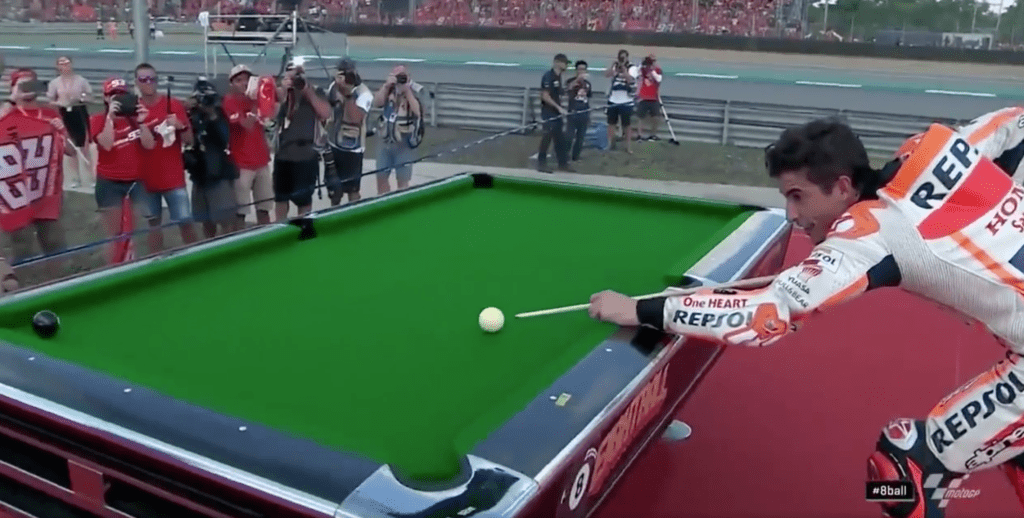