Masi Reinforces That Consequences Should Not Be Considered When Penalising Incidents – WTF1
Skip to content
×
Crash , Formula 1 , News , Penalties
17 comments

After the British Grand Prix, Max Verstappen’s championship lead has been cut to just eight points after contact between him and Lewis Hamilton on the first lap. There’s no shortage of opinions on the first lap antics and whether or not the penalty Hamilton received was harsh enough, or even if it was deserved at all.

Crucially though, the stewards deemed Hamilton to have been “predominantly at fault” in their official reasoning and awarded him a 10 second time penalty and two penalty points to his license to take his total up to four in the last 12 months.

Despite this, Hamilton still won the race and secured 25 points along with the two he got from Saturday’s sprint qualifying event. The TV broadcast showed people from both Red Bull and Mercedes pleading their cases to the FIA Race Director Michael Masi, with Mercedes losing the argument but still scoring the most points at Silverstone.

The moment of impact between Hamilton and Verstappen 👀#BritishGP 🇬🇧 #F1 pic.twitter.com/kxbV5xPYPt

Looking back on the incident, though, and the verdict reached by the race stewards, Masi feels that Hamilton’s penalty was correct according to the rules.

“Looking at the incident, I agree with the stewards and the penalty they applied,” said Masi.

“One of the big parts [of stewarding] that has been a mainstay for many, many years [is] that you should not consider the consequences in an incident.

“So when you judge incidents, they judge the incident itself, the merits of the incident and not what happens after as a consequence, and that’s been something the stewards have done for many years and have been advised to do from the top down – and I’m talking team involvement and so forth.

“That’s the way the stewards judge it because if you start taking consequences into it, there are so many variables rather than judging the incident itself.”

Ultimately the view by the stewards that Hamilton was predominantly rather than wholly to blame meant he received one of the smaller penalties, with the only one smaller that can be given by the stewards being a five-second time penalty.

Regardless of Verstappen’s situation, Hamilton may have avoided punishment himself had he stayed closer to the apex at Copse.

“I don’t know if [the stewards] expressed a view on what he should have done,” said Masi, “but I think having looked at it all, in their view, he was predominantly to blame for that.

The view from above of *that* incident#BritishGP 🇬🇧 #F1 pic.twitter.com/O7QhraSNq0

“Similar to what happened with Charles [Leclerc] later on [when Hamilton passed the Monegasque for the lead at the same corner], he could have stayed tucked in closer to the apex, and that was where they found [the issue].

“I think the wording was clear as per the regulations. He was ‘predominantly to blame’, not ‘wholly to blame for it.

“He could have tucked in further, and that may have changed the outcome, but we don’t know – we have to judge on the incident itself.” 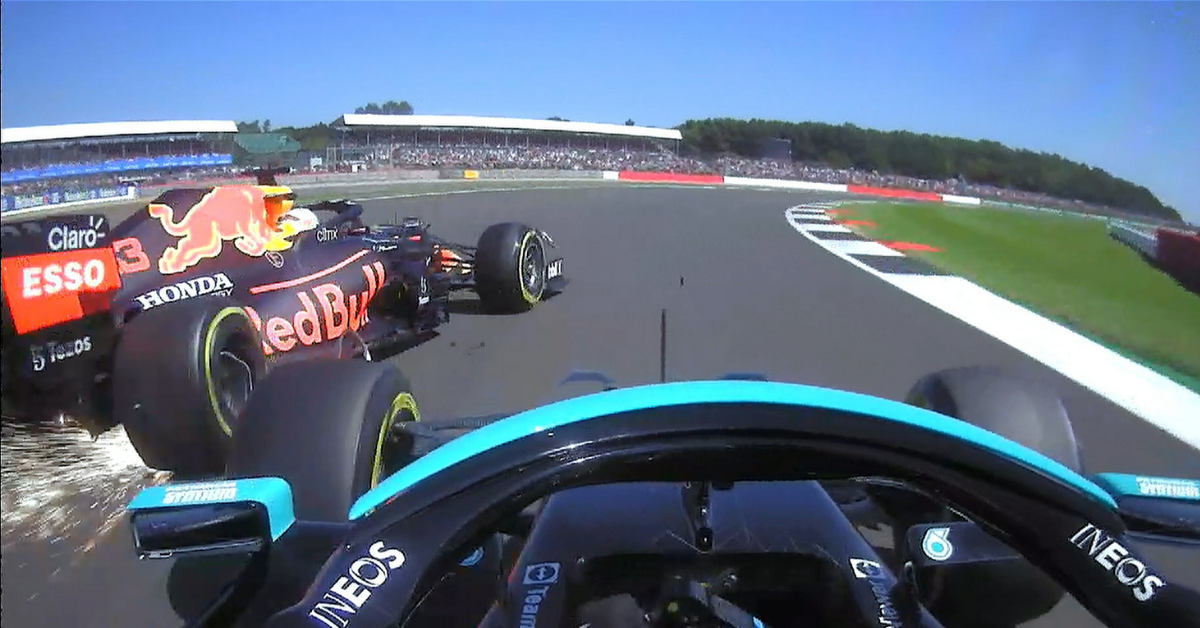