Matt Gallagher: How I Got Into F1 The Unconventional Way – WTF1
Skip to content
×
Formula 1 , Opinion , WTF1 Column
2 comments

Matt Gallagher: How I Got Into F1 The Unconventional Way

The next guest in our series of weekly columns is our very own Matt Gallagher! You’ll know him from being the face of our amazing YouTube channel, but have you ever wondered how he found himself in that role? Matt explains it all in his first editorial column on WTF1.com.

It’s safe to say that I’ve never written an article, for anything, ever. So, this is quite exciting but also nerve-wracking at the same time as I usually just blurt out words in front of a camera rather than putting them all down in writing.

I decided to make my first ever column about how I managed to step into the F1 world. I feel like – in this current economic climate – people may benefit from my story just in terms of potentially feeling better about where they are in life and that it can turn around at any second.

Let me take you back nine years. I’m a 19-year-old with absolutely no idea what I wanted to do with my life. I’d bummed around working part-time for a year after finishing sixth form, but It didn’t really phase me. I knew I was still young and had plenty of time to work out what I wanted to do eventually. My Mum, however, was rather concerned!

Two things were consistent in my life; F1 and gaming. Always has been and always will be.

When F1 2010 came out on the Xbox 360, it quite literally changed my life. I was hooked from the get-go and became rather good (if I do say so myself), which led me to start my YouTube channel to create videos.

Went from shouting in my kitchen to somehow appearing on sky sports news 😂 pic.twitter.com/pXj5vqSkp6

In the beginning, the videos I made were really bad. I had absolutely no knowledge of how to edit, so I learnt the basics and went from there. To be honest, they never really got anywhere near the level I wanted, but my passion wasn’t for editing or creating masterpieces; it was playing the game and expressing myself whilst doing it.

After constant grinding on forums, message boards and social media, I started to gain a few followers. When I say a few, I mean I pretty much lost the plot when I hit 100 subscribers. It was a huge milestone for me.

The aim of this column is not to tell ‘the story of Matthew Gallagher‘, but more to show that whatever you have a passion for, you should follow it.

As Michael Schumacher had on his farewell helmet, ‘Life is about passions, thank you for sharing mine’. I never in a million years thought I’d work in F1 because it’s a sport that is so difficult to get into, and I had no idea where I’d fit in.

The YouTube channel I’d originally started as a bit of fun got to just under 50,000 subscribers at the end of 2016, which I was incredibly proud of. Little did I know that one particular series I did – of me propping up my camera on the kitchen shelf and ranting for 7 minutes each week – would lead to WTF1 approaching me and changing my life forever.

At the time, the owners and Tommy Bellingham (THE FOUNDER) reached out to me out of absolutely nowhere to offer me a role I couldn’t refuse. It hurt a lot to turn away from the YouTube channel I’d built from scratch, but I do not regret a single thing because the community we’ve been able to build here is just unbelievable.

What I’d say to you reading this article is that if you enjoy writing, send it to every person you know. If you like presenting, film yourself and show off your work everywhere you can. If you love commentating, get involved in every single bit of racing action possible. Whatever you love, share it!

I’m not saying it’s easy to get your dream job because it took me about seven years from when I first started my YouTube channel to getting the opportunity: but it is achievable.

You will have people who don’t believe in you along the way, but don’t get this confused with people giving you constructive feedback – be open to this! The doubters can be the biggest of challenges because it can make you question whether it’s all worth it.

But I promise you, even if it doesn’t work out, you will not regret trying. If you put in the hard work and combine that with your passion for whatever you enjoy, it really won’t feel like work.

Aaaaand that’s a wrap! I’ve finished my F1 & F2 commentary duties for the year. I genuinely cannot believe I’ve had the opportunity to work for Formula 1. I’ve loved this sport since I was a toddler and to be able to work in it is something I will never get used to. Thank you ❤️ pic.twitter.com/t0opeDN8bQ

Damn, that got pretty motivational, huh.

Everybody has passions and things they love. You will come up against people with those same desires who will fight you for the opportunities of a lifetime. If you ever get an interview for your dream job, don’t be afraid to show how much you love whatever it is.

Much love to you all, my DM’s are always open on Twitter (@MattyWTF1) and Instagram (@mattwtf1), and I try to get back to people when I can.

I hope you enjoyed my first column! 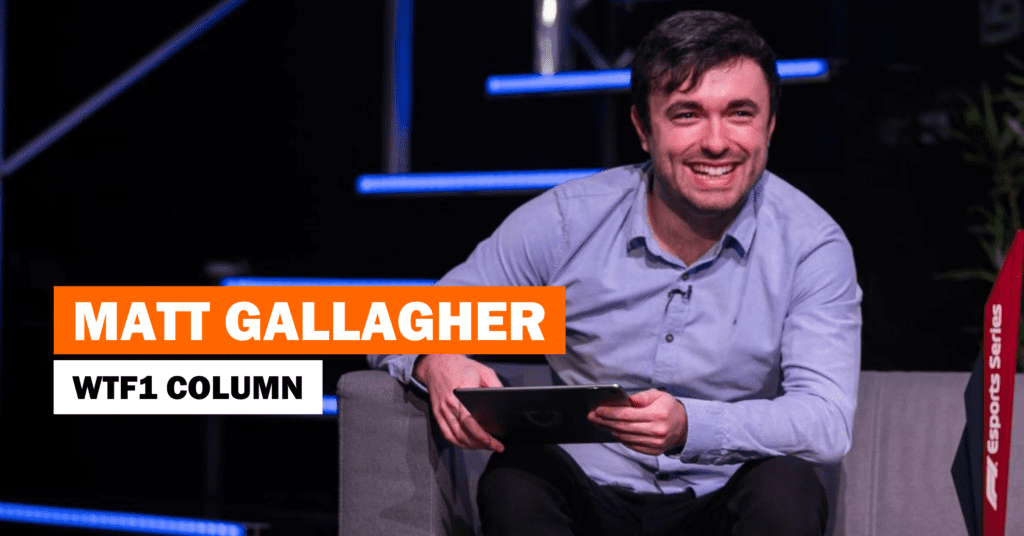