During a Q&A session Dr. Helmut Marko was asked a question but instead of taking the microphone when he gave his answer, he simply folded his arms and sat back whilst Max Verstappen held it for him.

Dr. Marko’s answer turned out to be quite long, a fact that Daniel Ricciardo found hilarious as he completely failed to contain his laughter at his teammate’s predicament.

Whilst Ricciardo spent pretty much the whole time laughing (and jumping in with an emergency napkin), Max seemed to find his new job as a microphone stand amusing at first, then a bit awkward, before becoming just plain fed up with it by the end. 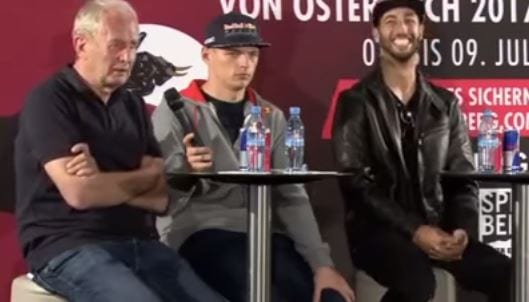