THAT WAS MEGA! Seriously, wow! Max Verstappen has won the Emilia Romagna GP and it’s just chaos behind him. Not one driver has had a clean race. We thought today could be exciting but that was something else! Are you sitting comfortably? Good. Then we’ll begin.

There was so much happening before we even got going. On the laps to the grid, Fernando Alonso spun into the wall and lost his front wing, the Aston Martin cars had brake problems with Lance Stroll on fire and then on the formation lap, Charles Leclerc spun.

Max Verstappen got the cleanest start of the top runners from 3rd and was able to jump past his teammate and went side by side with polesitter Lewis Hamilton into the Tamburello chicane. He eased Lewis wide ever so slightly, which forced him onto the kerbs and way off line, meaning Max had a brilliant lead by the end of the first sector.

A sublime start for Max, as Lewis takes damage over the kerbs 👀#ImolaGP 🇮🇹 #F1 pic.twitter.com/Z180Zw0LuY

Carlos Sainz had an excellent start, vaulting his way up the order from 11th despite it being impossible to see anything in the spray. But, the awful weekend continued for Valtteri Bottas who dropped to 10th. Sergio Perez looked to maybe get past Hamilton at one point but then he lost the car and was nabbed by Charles Leclerc who went up to 3rd.

Later round the lap, Nicholas Latifi spun out of 12th at Acquae Minerale. He was able to get going again and immediately was racing Nikita Mazepin as he got back on track. Latifi squeezed the Haas off the track and was spun round because Mazepin had nowhere to go. Latifi then flew into the wall and brought out the first Safety Car of the day.

That was Lap 1. Madness.

Under the Safety Car, you’d expect a breather, an opportunity to review the movers and shakers in the start perhaps, or maybe you forgot to make yourself a cuppa? However Mick Schumacher said ‘nope’ and spun trying to warm his tyres half way down the straight. He hit the wall and knocked off his front wing which blocked the pitlane exit. Poor Mick then had to go all the way around the lap twice to get it replaced as the Pit Lane was closed.

Sergio Perez also went wide at Piratella, Turn 9, and dropped two positions which he then retook. He was given a 10 second penalty for overtaking under the Safety Car later on.

Verstappen headed the field at the restart but Hamilton was tucked into the slipstream right behind. He had a look down the inside at Tamburello but had to brake much earlier and his front wing damage looked to hold him back as Verstappen pulled away. His gap at the end of that lap was over three seconds as he began to pull away.

The gap between the two steadied at around four seconds for the first half of the race as the drivers tried to manage the conditions.

The fight for sixth, with Gasly leading it at the moment

Further back, cars were dicing around all the time. Pierre Gasly, who had started on full wet tyres, was causing a blockage with the intermediate clearly the much faster tyre on the drying track. The train behind him was at some points eight seconds slower than the cars ahead. Eventually Gasly pit on Lap 15 but he had already been overtaken by pretty much everyone and he was nearly 30 seconds off the back of the field, mixing with the Haas drivers.

Lando Norris was recovering from losing his P3 time in qualifying yesterday brilliantly today and was one of the fastest drivers on track. He was stuck behind his teammate Daniel Ricciardo – who McLaren ordered out of the way – and Lando drove off into the distance to chase Charles Leclerc ahead. Daniel was left to be caught by Carlos Sainz behind later on.

Sebastian Vettel had a horrific start to the race with brake issues and had to start from the pitlane. He was far enough down the field to make a gamble to try slick tyres and on Lap 22 he pitted from 15th for medium tyres. He went a bit early and was slipping all over the place and holding up cars trying to lap him. It was a bit early but Aston Martin stuck with it and a few laps later, dries were a no brainer.

This meant Hammer-time and Lewis started to close the gap to Max taking over a second out of him on some laps as the two of them weaved through slower cars who had been held up earlier on.

On Lap 27, Vettel’s sectors started to turn respectable and Max pitted for dries with Lewis only a second and a half behind. Lewis stayed out and it became a guessing game. Both drove perfectly with Lewis setting the fastest times of the day but a slightly sticky front right tyre slowed him down and Max kept the lead.

But the games continued and they were lapping cars with Lewis closing on Max. But whilst Hamilton was lapping George Russell, he caught a wet patch of track and slid right off the track at Tosa into the gravel. He tried to accelerate onto an escape road but whacked his front wing into the wall! He came back onto the track but had dropped to P7, about 40 seconds off the lead and set about heading back to the pits to get the car fixed and reenter the race.

Hamilton slides off into the gravel, and hits the front wing#ImolaGP 🇮🇹 #F1 pic.twitter.com/7BBN3JN3IS

And then there was a huge crash.

George Russell and Valtteri Bottas were both in a huge wreck at Turn 1 chicane. George had been making a move on Valtteri and had clipped the grass and veered to the left into the Mercedes car at full speed. There had been a slight move to the right from Valtteri which George reacted to which is what made him loose control. It is to be investigated after the race.

Both drivers are out of the car and okay#ImolaGP 🇮🇹 #F1 pic.twitter.com/Y0xWuGm8Mb

It was a fearsome incident with both cars falling apart in the run off. The crash then brought out the red flag so they could inspect the barriers and clear the huge amount of debris across the chicane.

The race is suspended as the clean-up operation begins#ImolaGP 🇮🇹 #F1 pic.twitter.com/JPv4ehGOjr

TIME TO TAKE A BREATH

The top three at the red flag was Verstappen, Leclerc and Norris. Lewis was a lap down in P9 with his setbacks but the red flag gave Mercedes a chance to regather their thoughts and gain back the lost lap because all the lapped cars were allowed to unlap themselves for the restart.

The race was only half way done and a whole new challenge was coming up on the dryer track but with a much closer pack.

Hamilton reflects after a chaotic first half of the race#ImolaGP 🇮🇹 #F1 pic.twitter.com/QJaY618GsV

SHALL WE HAVE ANOTHER GO?

It was a rolling restart rather than a grid start after the red flag but that didn’t stop the drama. Before the race got back underway, Kimi Raikkonen spun from a good points position. Then, a corner before he had to floor it, Max dropped it and half spun but he caught it and, completely unphased, restarted the race immediately.

As Max streaked off, Lando Norris, from third, in his Mercedes powered McLaren was able to get a run on Charles’ Ferrari and launched into second place straight away. Sergio Perez was in 4th after he had served his penalty but he dropped it at the Villeneuve chicane after a few laps handing fourth to Sainz.

This was where the comeback of the race for Lewis began. The win was out of the question as Max pulled away from Norris and the Ferraris, but maybe a podium was for the taking?

Lewis picked them off one by one, he passed Stroll, he passed Ricciardo and then set about catching fourth placed Carlos Sainz. He made easy work of Sainz but struggled more to get past Leclerc who was in Norris’s DRS. Eventually, Norris dropped Leclerc and Hamilton breezed past and had made it to the podium. A hell of a comeback from the gravel trap!

He wasn’t stopped there and he hustled Norris. He had a few goes into Turn 1 and with a few laps left eventually was closer in the DRS zone and made it stick. Lewis was in 2nd.

Hamilton finally gets past Norris for second#ImolaGP 🇮🇹 #F1 pic.twitter.com/jfbzqqvhQs

Max Verstappen won the race, 22 seconds ahead of Hamilton with Lando Norris in a brilliant third place, more than making up for losing out in qualifying yesterday.

Now you can take a deep breath guys. That was quite something. I’m sure you can tell by the length of this race report that it lived up to the hype we gave it and some!

Your final classification from a crazy race around Imola!#ImolaGP 🇮🇹 #F1 pic.twitter.com/XBAYz0mlES

How was that for you? Did you cope? Do you need a lie down? Let us know in the comments! 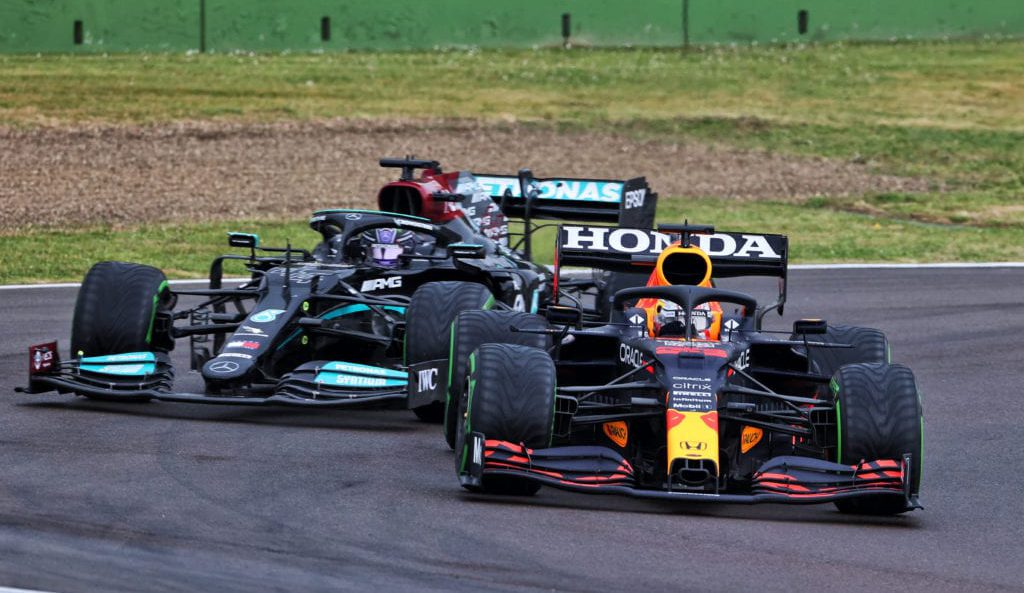