The final race of 1999 saw Mika Hakkinen face off against Ferrari’s Eddie Irvine for the championship. Hakkinen went into the race four points behind and the only way he could guarantee his second title was to win the race – and he did just that.

Now, as someone who remembers watching this live at the time, I’m having a hard time coming to terms with the fact that it happened 20 years ago. Thankfully, McLaren helped soften the blow of the inevitable passage of time by slapping us with a big, comforting hit of nostalgia. To commemorate Hakkinen’s success, the team gave us an insight into how things might have looked if Twitter existed on 31 October 1999.

McLaren really went all-out with it, beyond simply tweeting the day’s events as if it was happening live. There were fake newspapers complete with nice touches, such as an old-school time stamp on the photo:

📰 Let's take quick look at today's headlines as we gear up for the title-deciding #JapaneseGP.

Only one story dominating the news today (and it isn’t the Millennium Bug 👾) #NewspaperReview #SuzukaShowdown pic.twitter.com/zjgo9fw96t

There was even a Teletext update on the championship situation going into the race – now that takes me back!

So here’s where we stand before today’s crunch race. 🏁🇯🇵 Victory for @F1MikaHakkinen will seal the Drivers’ title, with the Constructors’ Championship up for grabs too. 👊🏆

Click for a look back at the 1999 season 🌐➡️ https://t.co/HiOJFqpCeN pic.twitter.com/6vizwoRdWe

Ross and Rachel ❌
Ken and Deirdre ❌
Mika and DC ✔️

We all know who the best pairing of 1999 is. 😉🏆 Good luck today, team! #SuzukaShowdown pic.twitter.com/MsXZwoy2tQ

…As did the ‘news reports’, including a nice little Lando Norris easter egg:

Plenty of other stories doing the rounds today. 📰

Looks like you may have a future @F1 star in the making, Mr & Mrs Norris! 👀👶 pic.twitter.com/M1lpa9ZEVc

McLaren even made a Spotify pre-race playlist to get you in the mood:

Turn up your Discman! Check out our pre-race song list 📻 👉 https://t.co/Rw1vZ9Pocu pic.twitter.com/29J3tEHKwj

Mika himself played along…

Final preparations with the team before lights out. Follow the 1999 #JapaneseGP on @McLarenF1. See you at the chequered flag! 🤞🚥🏁#SuzukaShowdown #Finn2Win pic.twitter.com/JnMySHWsgZ

…And the fans were of course getting involved with the theme:

Good luck Mika & McLaren! I made this picture for you. Bear with me while my dial up modem loads it up… ⏳⌛️ #SuzukaShowdown #Mika99 pic.twitter.com/UjNRptHoMd

McLaren also prepped some of their own:

…but woe betide anyone who declined to take a call from Ron Dennis!

Then came the race itself. McLaren continued the theme by going old-school with the classic yellow of the timing screens of the era.

A look at the 1999 #JapaneseGP starting grid. Michael Schumacher starts from pole, with Mika and DC tucked in just behind.

It’s going to take a monumental effort, but we can do this team! #SuzukaShowdown #Finn2Win 👊 🇯🇵 pic.twitter.com/GqaLBvYtMp

Cell phone on silent, put away your GameBoy and get ready to press record on the VHS. 📼🔴

The race coverage featured plenty of clips, including the onboard of Hakkinen’s first lap and his absolutely incredible launch:

A flying start from The Flying Finn as he gets away ahead of Schumacher! #SuzukaShowdown #Finn2Win pic.twitter.com/QTpnzyOqag

🏁 10 laps in and Mika continues to head the chasing pack. Coulthard sits P5.

🔄 @F1MikaHakkinen comes into the pits for a refuel and a swap of tyres on lap 19.

To the whole team, both here at Suzuka and back at base in Albert Drive, thank you! ❤️ pic.twitter.com/znzSFr7fBY

What a mega idea – and this is just a small portion of what was going down. To see all of the team’s coverage of the race, check out their Twitter page if you haven’t already done do – it’s absolutely worth it.

For Hakkinen, this proved to be his second and final championship triumph. The following year he lost out in a tight – and legendary – season-long battle with Michael Schumacher, and after the 2001 season he took a sabbatical which ultimately became retirement. 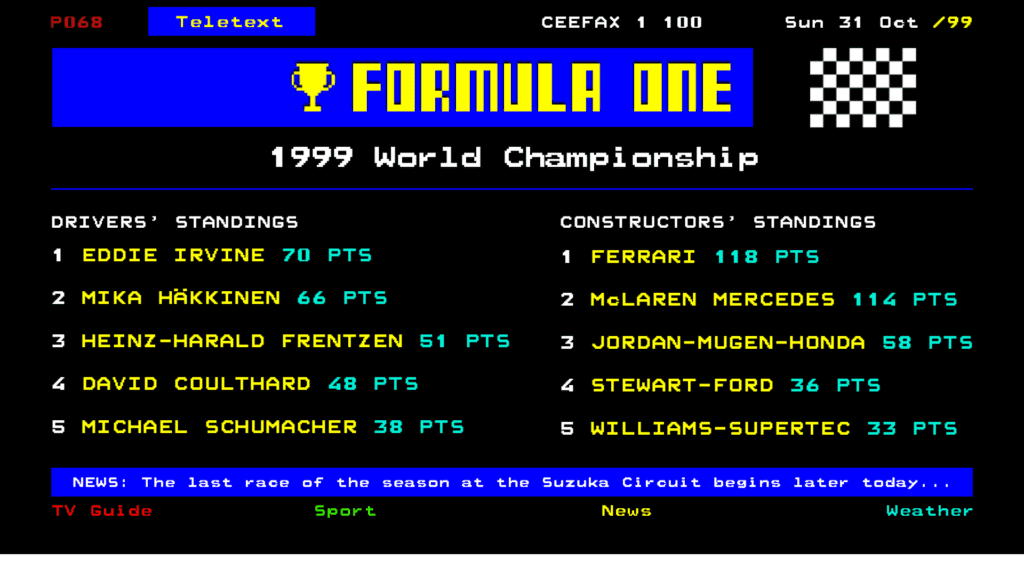