McLaren Has Apologised To Alonso For Its Shortcomings In Indy 500 Qualifying – WTF1
Skip to content
×
Indycar , News

The Triple Crown dream has been put on ice for another 12 months, somewhat unsurprisingly. Despite his best efforts, Alonso failed to make the cut on Bump Day at Indy by a matter of inches – having also missed out on a spot in the top 30 the previous day. It all ended a tumultuous week for the double Formula 1 world champion and McLaren, joining Pato O’Ward and former F1 adversary Max Chilton on the sidelines as Kyle Kaiser incredibly sneaked in on the final run of the day.

Speaking alongside Alonso, 2003 Indy 500 winner de Ferran described the failure as “the most painful experience” he’s had in 35 years of racing. For Alonso, there must have been a few Minardi or McLaren Honda-inspired flashbacks.

The Brazilian issued a heartfelt apology to McLaren’s widespread fanbase and the team, while also asserting that McLaren did not take the challenge of qualifying lightly.

“This has been a very emotional and difficult experience, not only for me but for the whole team. I want to take this opportunity to apologise and thank the fans, not only here in the U.S. but globally, who have been following our progress. I read a lot of nice things and some great messages all over the place. So thank you, and I’m sorry we won’t be in the Indy 500.

“I want to also apologise to and thank our team. The guys been have been working for several months, and particularly this last month or so have been a tremendous effort, and to try to come here and do the best we can, and they’ve worked all hours in the day, and I guess that was one of the main messages I had for the whole crew there.

De Ferran concluded his mea culpa by acknowledging that McLaren did not give the best package it could have done to Alonso, praising the Spaniard’s efforts in difficult circumstances. Having teamed up with Honda and Andretti for Alonso’s highly respectable first assault on the 500 two years’ ago (with de Ferran as advisor), McLaren looked towards Carlin after doubts over reconciliation with Andretti arose. Put together, the whole package was inadequate and may have made for a very, very long afternoon should the Spaniard have qualified.

“I want to apologise to and thank our partners who have been fantastic, and incredibly supportive through this journey. I thank also the whole IndyCar community, frankly, who welcomed us with open arms. All the way from the officials, safety people, all the other teams, everyone in and around IndyCar, it was nothing but a warm feeling and a lot of support.

“Last but not least, I want to thank this man here on my left, who – and I want to apologize to you, as well, because we didn’t give you a car that was fast enough. You drove like the champion that we know you are. Particularly these last three days have been incredibly tense and very difficult, and we couldn’t have asked anything more from you, Fernando. So I’m sorry, man. You’re an amazing driver.”

It’s not a total admission of defeat, however. De Ferran said that McLaren will learn from the harsh lessons it has learnt over the past seven months and presumably come back for a more successful attempt in the future. Whether that’s through a one-off or a full-time IndyCar entry remains to be seen – the waters are very cloudy when it comes to that subject.

“We’re very humble about everything that went on over here, and I think at this time I just want to say that we did learn a lot of lessons. We have to really look inwards and look at everything that we learned, cement those lessons and move forward. I consider myself a racer, a fighter. I want to apply those lessons, starting tomorrow.” 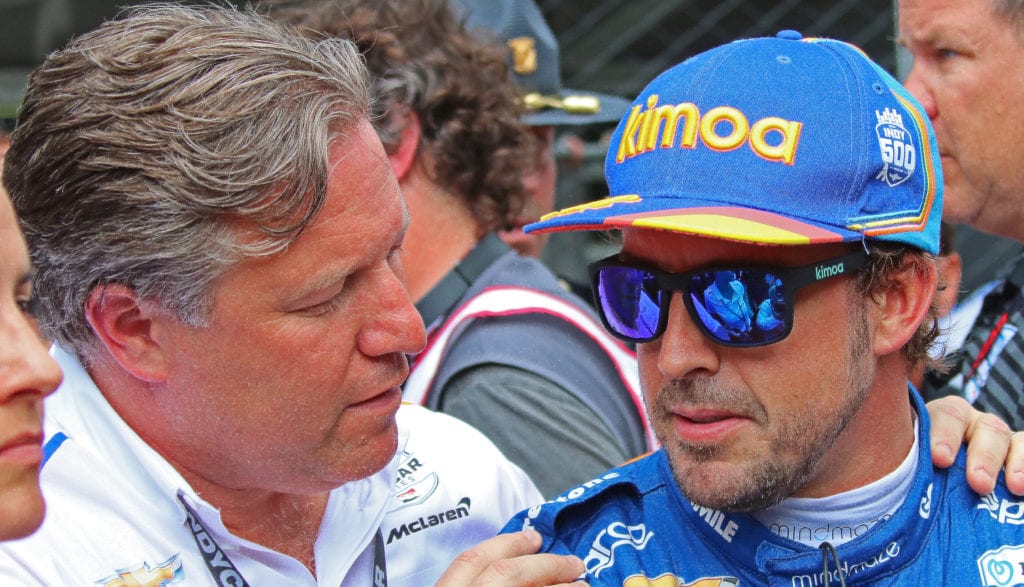