McLaren Has Broken Down Again On The Second Day Of This Week’s Barcelona Test – WTF1
Skip to content
×
Formula 1 , News

McLaren has suffered another major setback in the morning session with Fernando Alonso at the wheel. The MCL33 came to a halt on circuit with smoke coming out of the air intake. The car suffered a hydraulic leak with Stoffel Vandoorne in the car yesterday, and it sounds like there won’t be a quick fix for this problem either.

When McLaren and Honda parted ways last season, there was a general sense that fans were hoping both sides of the partnership would move on and get more competitive in 2018, but the early signs for McLaren are unfortunately doubtful.

Smoke billowing from the engine bay through the air intake and under the rear bodywork. Acrid smell of burning carbon. Not going to be pretty when they open it up. pic.twitter.com/gIWNcuYtex

After three years of excusing themselves because Honda was the fall guy, McLaren have less wiggle room in the excuse department this season. Alonso clocked thirty-three laps before his stoppage this morning whilst rivals will no doubt clock many more laps, most teams hitting a century of runs per day.

This stoppage doesn’t exactly breed confidence for the McLaren-Renault partnership, and if the problems continue, we doubt Renault will play the fall guy when its power units are working consistently with its works team and Red Bull Racing.

Although Verstappen’s duties were cut short in yesterday’s afternoon session, Renault balmed its batteries for the stoppage and suggested it was a similar issue with McLaren. But today’s stoppage doesn’t indicate that the issue has been solved, and something very hot beneath the chassis of the MCL33 has probably burned other components and makes the likelihood of a quick fix slim.

That familiar, sinking feeling that has become symbolic of being a McLaren fan in recent years is back. We expect the drivers and team to remain professional in front of interviewers, but there must a real underlying sense of insecurity within the team after yet another issue. This was supposed to be the year in which McLaren staged a comeback, but the early signs aren’t great. Hello darkness my old friend. 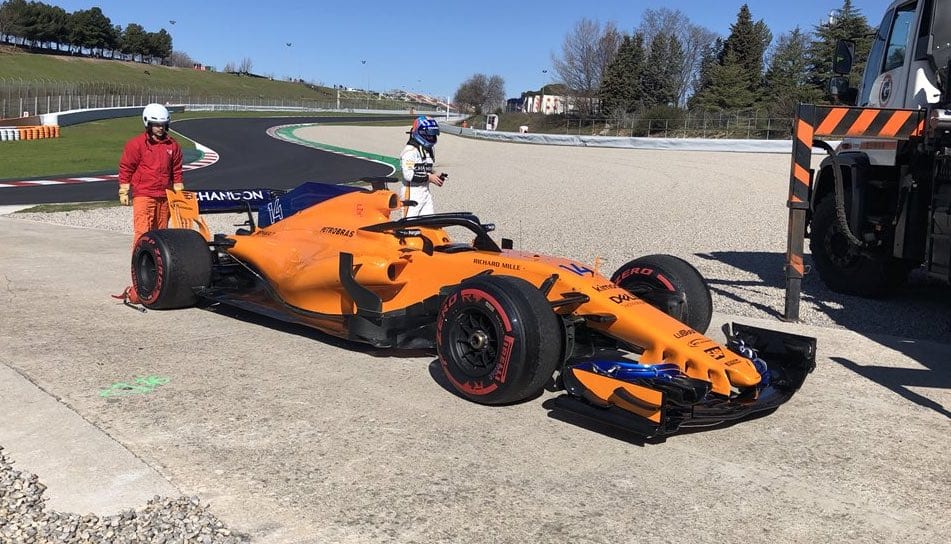