McLaren has been dropping plenty of hints on their social media about an exciting announcement and has now finally revealed they’re embracing a one-off livery for the 2021 Monaco Grand Prix. McLaren Racing and Gulf are bringing back one of the most ICONIC racing liveries of all time for the race around the famous Principality of Monaco.

The team will use the pale blue and orange livery throughout the entire Monaco Grand Prix. As well as a change to the livery, the racing overalls and team kit will be adapted too. Both Lando Norris and Daniel Ricciardo will also have a specially designed retro racing helmet for the weekend, which will be raffled off for the Mind charity.

McLaren and Gulf have a long history together. Their partnership started towards the end of the 1960s and has seen several different projects since then. As well as working together in F1, the duo also worked together in the Can-Am series and Le Mans 24 Hours – with the McLaren F1 GTR featuring this iconic Gulf livery throughout the ‘90s.

Both McLaren Racing and Gulf revived their relationship in 2020 and is now the team’s official strategic partner.

“This will be McLaren’s homage to Gulf’s celebrated race car design,” McLaren CEO Zak Brown said about the one-off livery. “We’re enormous fans of the brave and bold design, and the striking Gulf blue is among the most loved liveries in racing. A celebrated piece of culture which transcends the world of motorsport.

“Design has always been important to McLaren – you see this in everything we do from our return to papaya to our stunning headquarters, the McLaren Technology Centre. We’re excited to exhibit this as a team and celebrate our proud association with Gulf in Monaco.”

This won’t be the first time a team has a run a one-off livery in F1, especially at Monaco.

Red Bull in the past have had promotional Star Wars and Superman liveries. Jaguar also included a $300,000 diamond in their car’s front nose at the 2004 Monaco Grand Prix to promote the new Ocean’s 12 movie – a costly mistake as the diamond was lost and never found when their driver Christian Klien made contact with a wall during the race.

What do you think about this one-off livery? Let us know in the comments below. 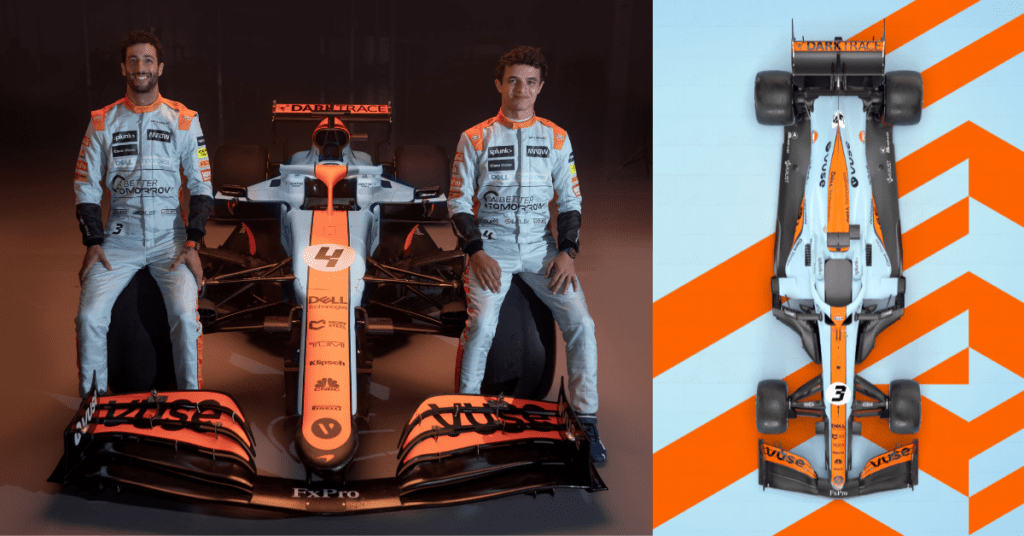