It was a difficult eight days of running in pre-season testing for McLaren. 2017 really hasn’t got off to the best start for both McHonda, it’s been a bit of a nightmare.

From engine changes to breakdowns and limited track time, there’s only one way to easily describe the team’s testing: Alonso emojis.

With McLaren’s bright new livery and the good-looking MCL32, there was a lot of hype and positivity before testing started.

And the car headed out on track for the first lap of pre-season testing. Yay!

The smiles didn’t last long though, because the Honda engine was hit by an oil systems issue. Oops.

Naturally, Alonso spent a lot of time with his feet up in the garage, due to the various problems.

Then, on the next day, Stoffel Vandoorne only managed to match Alonso’s 29 laps from day one before he lost power. He got back out on track but it wasn’t great…

The McLaren team were worked ridiculously hard during the first test, with constant engine changes.

Day three of testing went much better and the team was able to make up for lost time. Hurray! Progress was being made.

Day four went pretty well too, were the tides turning?

Back in Barcelona for the second test and the day started and ended well, but the mid-point… not so much due to ANOTHER power unit change. The crew were getting a lot of practice in.

How about day three? Well, it was stop-start, to say the least, due to a few problems emerging. Only 46 laps completed…

Two electrical issues on day three meant the team had to completely strip down the car to investigate, which severely impacted McLaren’s running. Not again…

Even on day four of the second test, McLaren were still making lots of component changes. Alonso isn’t happy.

Let’s hope Alonso can use some happier emojis when the F1 season starts. 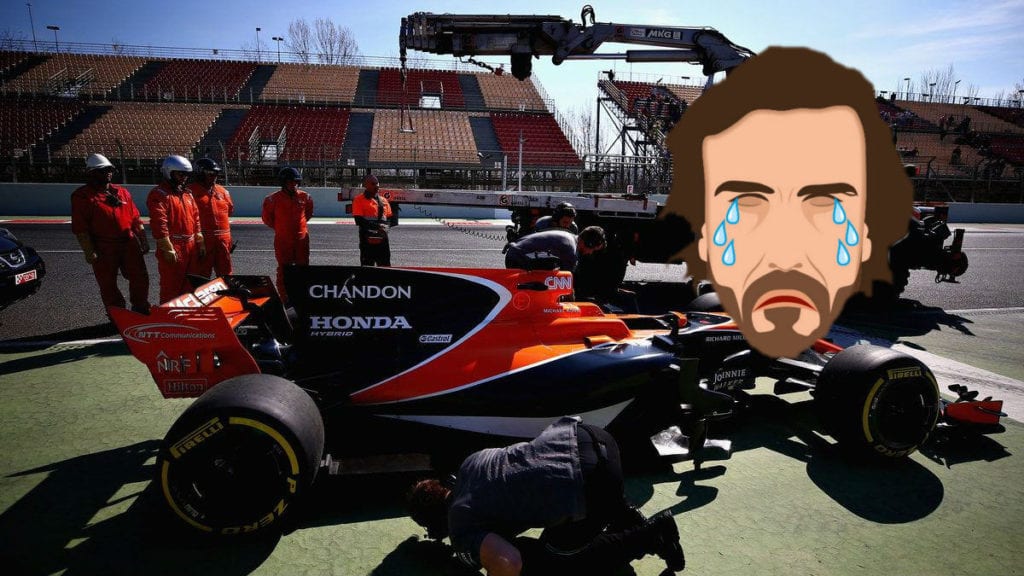