Mercedes Finally Admit They Messed Up The Hungarian GP Restart

Mercedes were pretty firm after the Hungarian Grand Prix that they hadn’t made a mistake leaving Lewis Hamilton to take the restart in Hungary on his own. As well as being one of the iconic images we’ll probably see in F1 history, we all kinda knew they’d messed up, and now they’ve admitted it wasn’t the most intelligent move.

With the quick-changing track conditions, all drivers except Hamilton pitted for slicks at the restart after the early Red Flag. This left Lewis all his own on the grid, and as a result, messed up his race.

Straight after the race, Toto Wolff told Sky Sports that it was the right decision to stay out even though it meant they ended up last.

“To be honest, I think we did exactly the right thing,” said Toto. “There’s no one in the team that would’ve done otherwise. As a leading car, it’s always difficult to take the decision, and if you’re the only one pitting, then you come out last.”

I mean, you still ended up last anyway, Toto, but you do you.

“Clearly, in hindsight, we made the wrong choice,” Mike explained. “You have to bear in mind those decisions are really, really tricky. We agonise over what tyres to fit at the very start of the race, as it turned out the Inter was definitely the right choice as it started raining on the lap to the grid, we agonised over what tyre to fit after the red flag, and clearly, all of the cars fitted Inters.

“On that lap to the grid, clearly others decided to change their mind, and we should’ve too.”

There it is! Finally.

There were reasons that Mercedes were a little cautious to pit too.

“We have the first pit box in the pitlane. So, as we’d have come into the pit lane and we’d boxed, all the cars would have been pouring past, and it would have been very difficult for Lewis to get out, and that would have delayed us.

“If we had tried to force our way out into the pit lane, we could have collided with another car, and we actually saw that happen in that sequence of pitstops.

“Our main rival was further back, and what we needed to do was to not make a silly mistake and end up crashing into another car. As it happened, we would have been better off pitting, even if we had to wait to the back of the queue.” 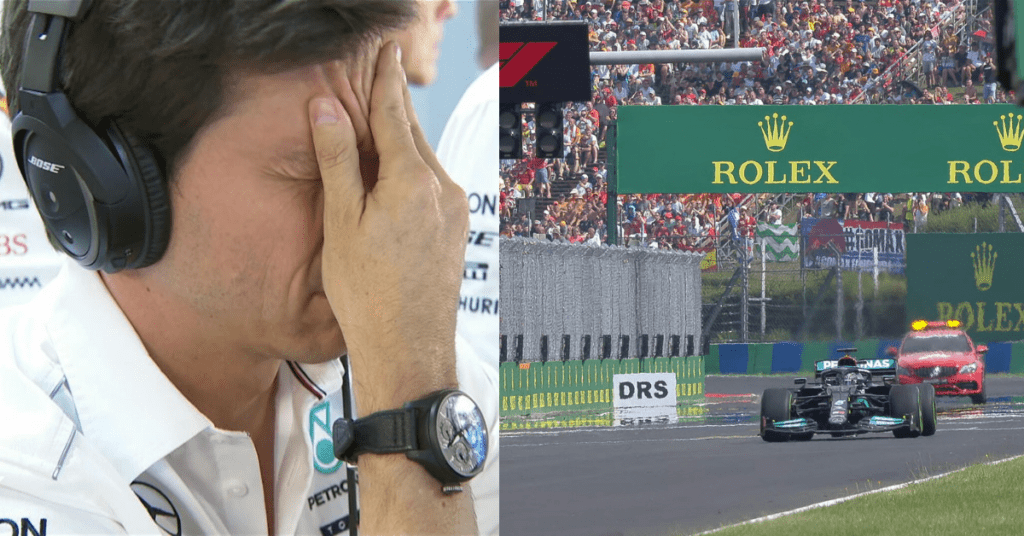