If you’ve ever wanted a road car with direct links to Formula 1, pretty soon you’ll be spoiled for choice. The upcoming Aston Martin Valkyrie is part of a joint venture with Red Bull and will feature some seriously trick aerodynamics which will apparently make it as fast as an F1 car.

Now Mercedes has unveiled its own hypercar, and it has pretty much the same technology as its current F1 cars, just converted for road use. No, really – it even has a shark fin!

Built to celebrate 50 years of AMG, the Mercedes-AMG Project One will feature a 1.6-litre hybrid powerplant which comes straight from the F1 cars.

It includes all the same hybrid systems too, only unlike the F1 car it will be all-wheel-drive and feature much bigger and more efficient batteries so that it can have an all-electric mode for short journeys.

Because it’s a road car there are some concessions – the gearbox is different, and the engine has a lower redline, but according to Mercedes it’s still good for more than 1000bhp, will still rev to 11,000rpm, and has a top speed of more than 217mph, all using regular fuel.

It’ll ‘only’ last for 30,000 miles however, at which point the engine will need an extensive rebuild. If you have it done before that, do you have to take a 10-place penalty at the next set of traffic lights?

The interior draws from F1 too, though it looks slightly more luxurious than the current W08 and the steering wheel isn’t quite as complicated.

So, what do you do? Do you go for the Aston Martin Valkyrie’s game changing aerodynamics, or the actual F1 tech in the Mercedes-AMG Project One? The answer is simple: you get both! 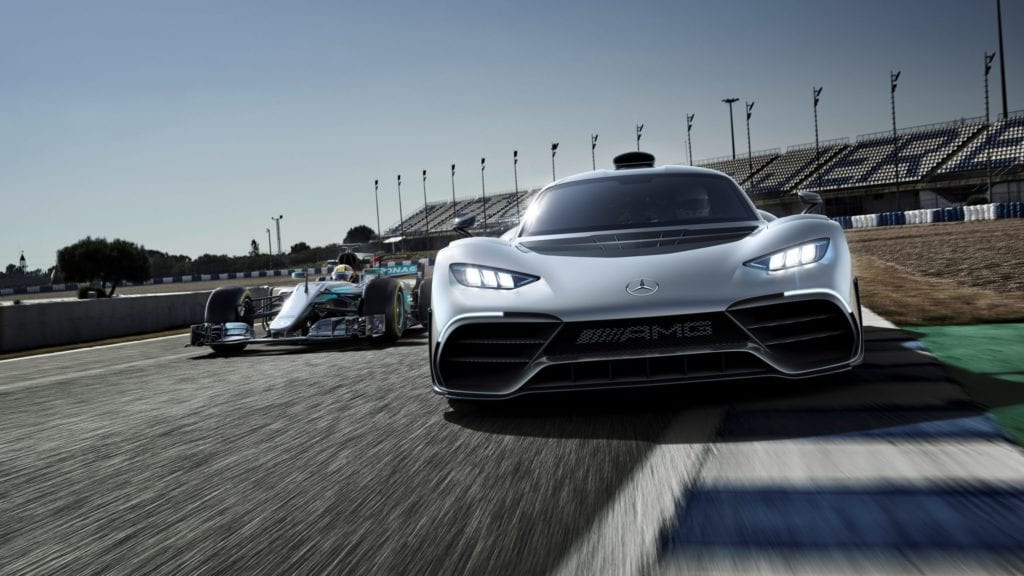