Mercedes Is Using A Special One-Off White Livery This Weekend

Mercedes’ motorsport history dates all the way back to 1894 which, if your maths is on point, you’ll notice was a staggering 125 years ago. The German GP will also mark the manufacturers 200th grand prix and, coincidentally, it’s also a race which Mercedes-Benz is the title sponsor of.

Throw all those anniversaries and milestones together and you’ve got the perfect excuse for a one-off livery – and that’s exactly what the team appears to be doing.

Yep, that definitely appears to be white. Why white? Well, until sponsorship started to dictate liveries in the 1960s, teams and manufacturers used to race in their national colours – for France, that was blue, red for Italy, and green for the UK. Germany? White.

Mercedes-Benz (and before that Daimler and Benz) therefore raced in white for decades until the 1930s, when the cars started to appear in bare silver (hence the name ‘Silver Arrows’). The story goes that scraping the paint off was a last-minute effort from the team to meet a maximum weight limit, however it’s far more likely that the cars were intended to be left unpainted as a weight-saving measure.

The white livery is therefore not just a nice throwback to Mercedes’ own past, but (Petronas turquoise aside) also the entire era of national racing colours.

The old logo, classic script, and a colour scheme dating back almost 90 years. This isn’t a retro livery, it’s a vintage one – we can’t wait to see the rest of it! 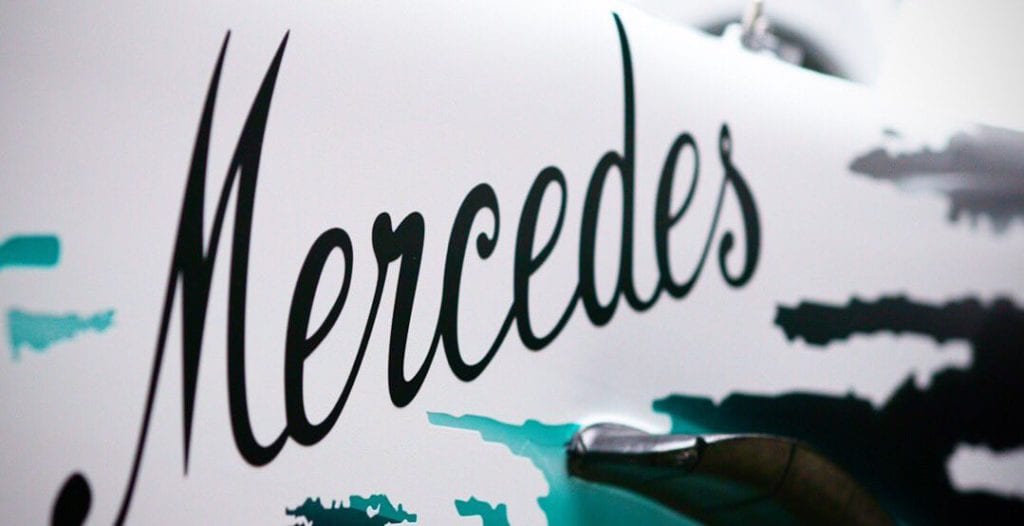