Harry’s message inspired Hamilton and after the race he dedicated his victory to him, saying:

“I had a really nice message from a young kid who is suffering with an illness. We had sent him a card and a cap and I saw that today before going into the race. I was chilled but I was looking for something for inspiration, something to grab on to, so I dedicated today’s race to him. You try to go out there and do something for someone and it doesn’t always turn out as well as it has, but nonetheless it has, so I hope he’s watching.”

Harry, you don’t know how much this message means to me buddy. Thank you so much, you are my inspiration today Harry. I will try to make you proud. You are such a strong boy, I wish I was as strong as you, I wanted the world to see how strong you are and ask everyone to send their best wishes and prayers to you during this hard time. Sending you love Harry. God bless you. Your friend, Lewis #keepfighting #nevergiveup #wewinandwelosetogether

It’s incredibly hard not to be moved by that but the team wasn’t going to stop there.

On the way back from Barcelona, Mercedes stopped off at Harry’s home with the race-winning trophy, a pair of Hamilton’s gloves, and Hamilton’s race-winning car, parking it on the driveway for Harry and his family to enjoy.

Wow. It’s been a crazy 24hrs! Today we’ve been visited by @mercedesamgf1 and Harry is holding @lewishamilton 🏆On top of all of that we find a @f1 @mercedesamgf1 car in the drive! #letsjustgetitdone and raise money for cancer research @harryspledge5 https://giantpledge.com/harrysgiantpledge Harry hasn’t got long to live so let’s raise some money for cancer research. #nevergiveup @natalie_pinkham @heidiklum @djokernole @royalmarsden @giantpledge #keepfighting @canucks @canucksfin #harry

According to ITV, Harry left the house for the first time in three weeks to be shown around the car. Harry’s father James said:

“I cannot describe how much it means to us all that Lewis won the race for Harry, and then dedicated it to Harry, too. At a tremendously difficult time in our lives, this has provided us with a big boost, and a big smile.

“Harry couldn’t believe that Lewis Hamilton was talking about him, and had dedicated the race to him. He now thinks that Lewis is his absolute best friend, which, for a five-year-old boy, is amazing. Harry loves cars, and although he is frail, he was asking about the exhaust pipe. He is very inquisitive, so that is typical of Harry, asking questions and getting involved. Mercedes have taken us to a much-better place in a dark time.”

Thank you @F1. We have been blown away by the support from @MercedesAMGF1 @LewisHamilton and the whole #f1 community. @HarrysPledge5 loves cars and racing. We just wish all of this was under different circumstances. @NataliePinkham @SkySportsF1 @MBrundleF1 https://t.co/TkVXpC5n9q

Full marks to Mercedes and Hamilton for their incredible gesture and giving Harry an amazing experience. To find out more about what Harry is going through, you can read about his story on his JustGiving page here. 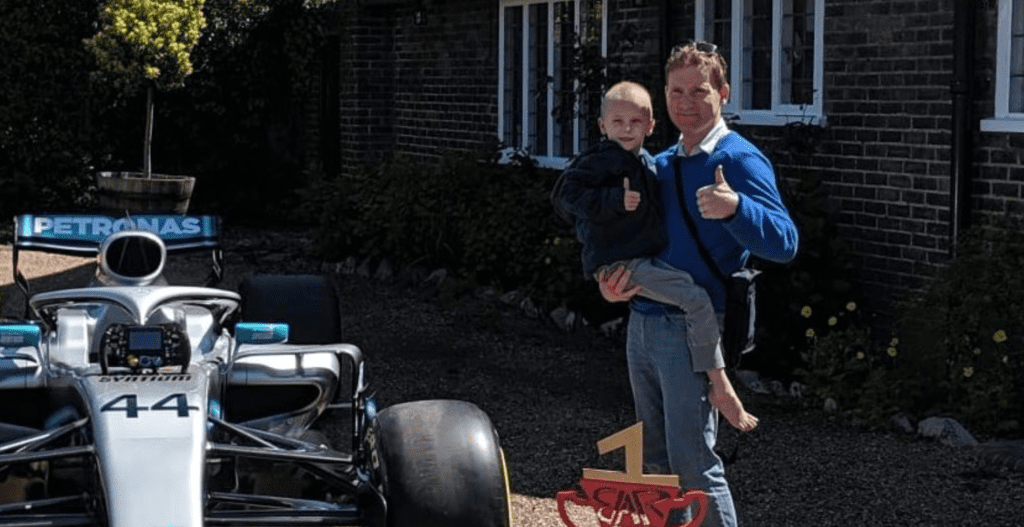