Poor Valtteri Bottas had an absolute shocker yesterday when he pitted from second place at the Monaco Grand Prix. His teammate, Lewis Hamilton, had just completed a successful and quick pit stop, but Bottas wasn’t so lucky. When arriving for his only pit stop, his front-right was totally stuck, and the team couldn’t remove the wheel nut.

Despite their best efforts, including trying a backup wheel gun, the wheel nut was well and truly stuck and could not budge. He was out of the race and lost an almost certain podium finish. It was also the first time this season he looked to finish ahead of Hamilton in a race.

“We need to look at if it is a design issue or whether we just had a catastrophic failure of a few systems which machined the whole map off,” Mercedes Boss told the media yesterday after the race. “There was no part there anymore.”

It turns out that the failure was so bad, the tyre is still on the car. That’s right. Mercedes’ Technical Director James Allison revealed that the car was still sitting in their garage with the wheel still on it.

“We’ll have to get a Dremel out and painfully slice through the remnants of the wheel nut. We will do that back at the factory.”

“It’s a more extreme repeat of a thing we’ve talked about in public before, which is if we don’t quite get the pitstop gun cleanly on the nut, then it can chip away at the driving faces of the nut. We call it machining of the nut.

Bad luck. Can’t put into words how disappointing it is to DNF. With the efforts we have put into this weekend again and to get 0 points. Learning day for us as a team. But we stick together & come back stronger!#VB77 #F1 #MonacoGP@mercedesamgf1 @f1
📷 S.Etherington pic.twitter.com/QzL78DAWgJ

“If the gun starts spinning and chipping off the driving faces of the wheel nut, then in quite short order, given the violence and power of the gun, then you can end up with no driving faces, and you’ve just machined the nut down to a place where there’s nothing left to grab hold of, and that’s what we had today.”

Either way, it was a disaster day for Mercedes. Not only did they lose a potential P2 for Bottas, Hamilton and the team struggled all weekend which they’ve said they’ll investigate post-Monaco.

With it now being clear that it’s going to be a job for the factory guys back at Brackley, it did appear at one point that Toto Wolff was going to rely on some neighbours down the pitlane to help get this tyre off Valtteri’s car.

“Ferrari is going to help us out with some heavy equipment, either a big hammer or something.”

Every little helps, we guess. 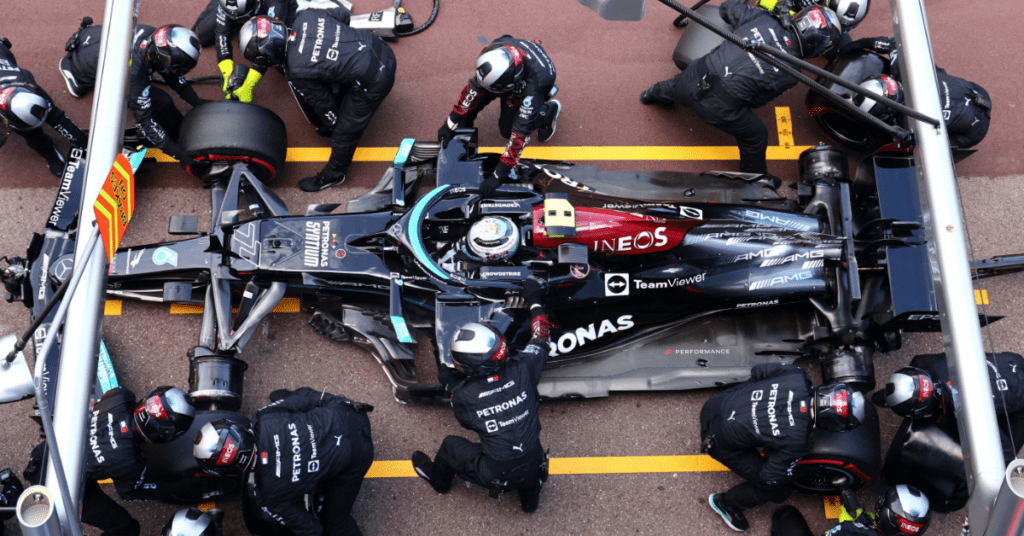