After an incredibly eventful race, Mick Schumacher managed to nurse a savage flatspot, make a championship-deciding pitstop and secure his first F2 Championship.

The Prema driver has won two feature races and has 8 podiums to his name from the 2020 season, however this last race certainly tested Schumacher and his nerves as an early lockup nearly cost him everything.

With Schumacher starting third and Ilott fourth, Schumacher made a risky early move to jump up the field but almost crashed up the back of leader Dan Ticktum.

It was clear his tyres were gone early on in the Sprint Race, as onboards showed Schumacher experiencing heavy vibrations on an already bumpy track surface. Mick and the team made the call to pit for a new set of tyres, pushing him down to 20th on the grid as Ilott climbed ever higher and left fans wondering who would take the championship crown in the final race of the season.

This is how close Schumacher was to contact with Ticktum #F2 pic.twitter.com/VANMDr3VV1

Thanks to the points gap that Schumacher was able to generate throughout the season, Mick was able to pit for a fresh set of tyres and keep it safe at the back of a tightly-packed grid on this extremely short circuit and still maintain his championship lead.

Schumacher will be promoted to F1 next year, racing with Haas F1 Team alongside fellow F2 racer Nikita Mazepin.

“I have no words,” Schumacher said on team radio after taking the championship.

“To be champion, I owe it all to my team!

“I’m a bit overwhelmed at the minute, it’s going to take a few days. I’m just so happy and grateful!”

This story will be updated. 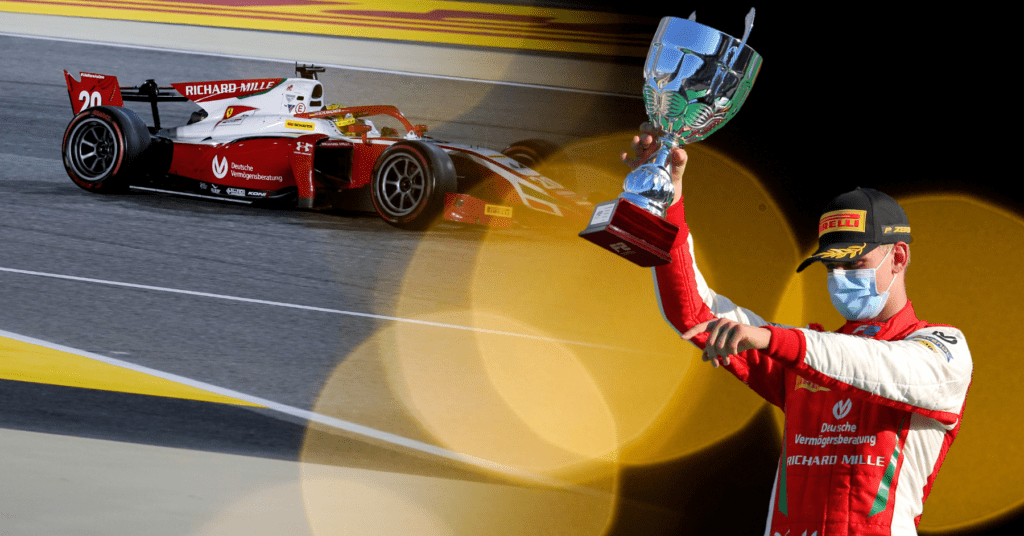