For any son or daughter of a racing driver, living up to a famous name is an immense pressure, none more so than when you’re the son of the most successful Formula 1 driver of all-time. It’s fair to say that until recently, Mick Schumacher’s racing career was slightly unspectacular: he was runner-up in a couple of regional Formula 4 championships and nabbed the odd podium here and there in Formula 3.

But this year, halfway through his second season in European F3, he took his first victory in the series – fittingly – at Spa. Since then, something just seems to have clicked. Wins followed at Silverstone and Misano and this weekend he was virtually unbeatable at the Nurburgring, winning all three races.

Winning all three races in a weekend is no mean feat; he’s become only the sixth driver in the championship’s history to do so – the others being Lance Stroll, Max Verstappen, Esteban Ocon, Felix Rosenqvist and Raffaele Marciello. Not bad company to be in.

Schumacher has now won more races than anyone else all season and hasn’t finished lower than fifth in the last eight races. With six races to go, he’s now just three points behind championship leader and Red Bull junior driver, Dan Ticktum. Given his momentum and current form, Schumacher has to be looking like the favourite for the championship.

Where will he go from here? Well, although he tested a DTM car recently, rumour has it he’s in line to make the step up to Formula 2 for next season. And given that he races for Prema in F3, he could be entering F2 with one of the best teams.

Is it too early to get hyped over a Schumacher? Maybe. But with the form he’s in at the moment, it’s kinda hard not to be. 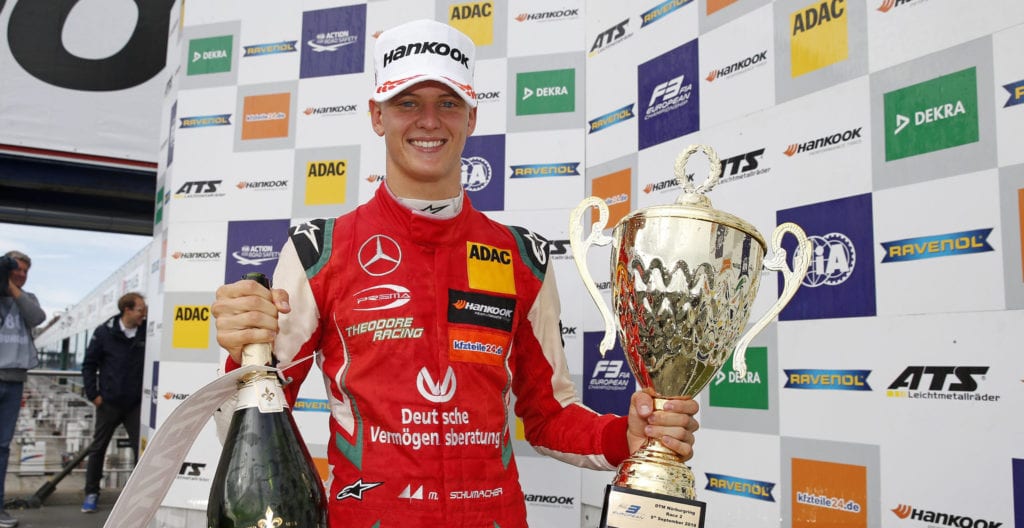