It’s the second classic Formula 1 car the 20-year-old will have driven, following on from a special run in the 1994 championship-winning Benetton at Spa back in 2017 – to commemorate the 25th anniversary of Michael’s first F1 win. This appearance in the blindingly fast F2004 not only marks 25 years since Schumacher Snr.’s first world title, but also 15 years since his seventh and final triumph.

Hockenheim was usually a happy hunting ground for Michael, who took four wins there, and Mick wrapped up a superb fightback to the 2018 FIA Formula 3 European championship title at the iconic track too. Schumacher Jr. will showcase the V10-powered car before qualifying on Saturday and before the drivers’ parade on Sunday morning – as F2 omits a visit to the German round. Schumacher said:

“I think it’s mega driving this car in Hockenheim. The last time I was on this track was when I celebrated my Formula 3 championship title, and now I’ll be able to drive one of the strongest cars in Formula 1 history there – a big grin creeps into my face. All motorsport crazy people can look forward to a very special and wonderfully loud moment.”

F1’s managing director of motorsports, Ross Brawn, is another man who is quite attached to the F2004. After all, it was the car that helped him to a seventh F1 world title – his fifth as part of the all-conquering Ferrari brain trust. Brawn anticipates that seeing the younger Schumacher in the car will be an “emotional” occasion, and revealed that F1 and owners Liberty Media are inundated with requests to see some legendary cars back on the track in some way.

“It will be an emotional moment seeing Mick at the wheel of a car linked to so many great memories. The F2004 was a fantastic car, which took 15 wins and both championship titles in a season that can be seen as the culmination of a golden period, which was the result of all the hard work from an amazing group of people and Michael Schumacher, a supremely talented driver. I’m sure that all the fans at Hockenheim will be pleased to see it roaring around the track again, especially with Mick in the cockpit. One of the requests we get most often from fans is to see the cars that wrote F1 history back on track, so this demonstration run at Hockenheim will be truly unmissable.” 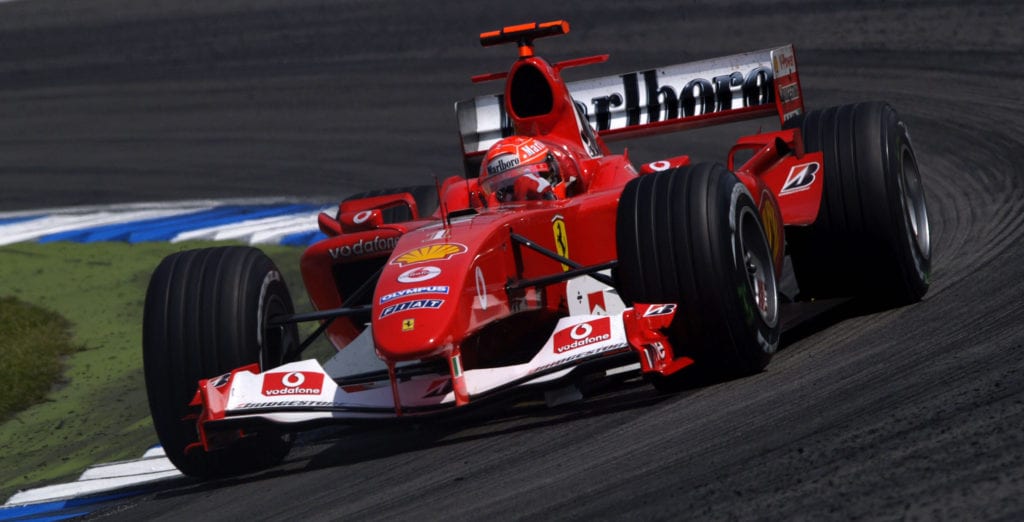