A couple of weekend’s ago, NASCAR hosted its annual ‘Throwback’ weekend at Darlington. For those that don’t know about it already, it’s a race that’s part of the NASCAR season like any other, but what makes it special is a big celebration of the sport’s history, and teams are encouraged to run retro liveries.

It’s not just livery nerds like myself that love the NASCAR Throwback race, though. Fans love it, there’s social media hype, and it captures the buzz of launch season all over again as liveries are revealed ahead of the weekend.

However, well-designed liveries are, let’s be honest, our opinion on them is mainly based on nostalgia… everyone loves a retro livery, right!? Just look at the reaction to McLaren’s recent announcement that the team would be running an iconic Gulf livery at this weekend’s Monaco Grand Prix.

On one of the previous WTF1 Podcasts, I mentioned Monaco would be a perfect race to do a NASCAR Throwback-style event. As someone who adores Monaco, I’m not going to pretend it’s always the most entertaining race but the race weekend and watching modern cars race around a historic track that’s barely changed since 1929 is something really special.

This throwback race would make Monaco feel even more special and stand out further as “the jewel in the crown” of the calendar without awarding extra points like WEC and IndyCar do with Le Mans and the Indy 500.

Retro one-off liveries have become fairly popular in recent years. Mercedes had a special ‘scratched paint’ livery for the 2019 German Grand Prix. Although based on how that race went for the team, Toto Wolff made it clear the team wouldn’t be playing fancy dress any time soon.

Then there was Ferrari with the burgundy colour scheme at Mugello last year to celebrate their 1000th Grand Prix, again it wasn’t the greatest race for the team, but it looked cool, right?!

When McLaren announced the iconic Gulf livery they’d be running for this year’s Monaco Grand Prix, social media fell madly in love with the new design. Not only was this great for McLaren, it was a sponsor’s dream!

The publicity they’ve received ahead of Monaco will be more than any other sponsor you see on an F1 car this weekend, and I wouldn’t be surprised if other brands fancy getting on the one-off livery hype train after this.

We, of course, don’t want a situation where liveries are changing every race like race helmets. It would be confusing for audiences, for one, but imagine Monaco each year where we get to see every team do a special livery reveal. The hype on social media would be something else.

Alpine stick a bit of yellow Renault e-Tech sponsorship on the car and have a blue and yellow livery throwback livery for the Alonso/Renault era… Aston Martin adds some Cognizant blue to the green for a Jordan 191 tribute… Haas get Rich Energy ba- ok, maybe not that. But you get the idea!

Also for those who wanted to see the Jordan 191 tribute Aston livery, I also did this 😄 #GTSport https://t.co/8ooAp2IQtD pic.twitter.com/jh27VDi1rh

It’s no surprise that with the McLaren Monaco livery hype, the idea of a ‘NASCAR Throwback’ race for F1 is being thrown around a lot at the moment, with RACER even asking Daniel Ricciardo and Lando Norris about the idea.

They were all for it! With F1 relaxing the livery rules to allow these special liveries to happen, the value that sponsors get out of it and the positive fan reaction, the idea of a Monaco throwback weekend might be something F1 seriously considers in the future.

Would you like to see it happen? Let us know in the comments below. 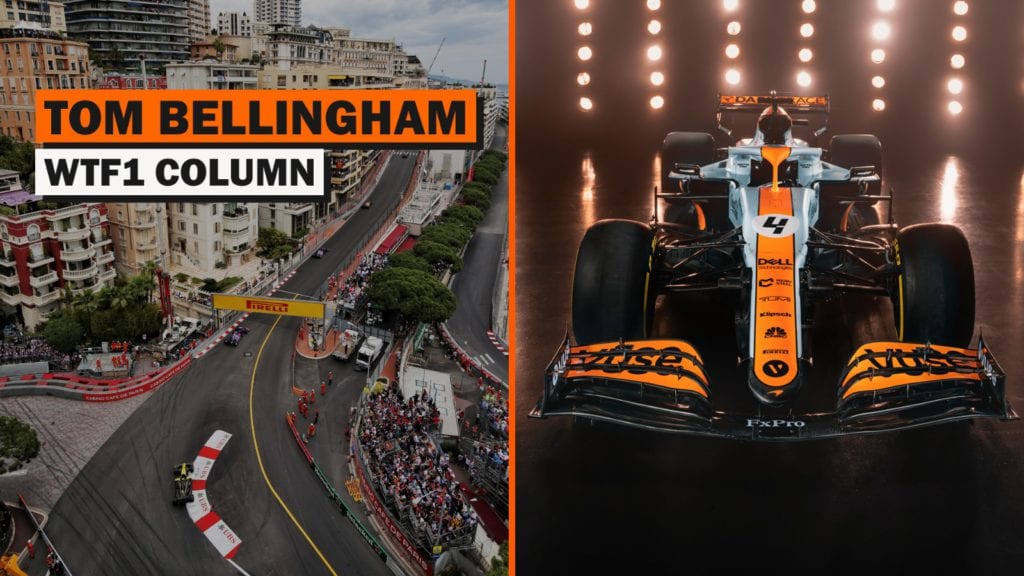