Over the last few years, Andrea Dovizioso has pretty much been the only MotoGP rider able to consistently mount a challenge to the onslaught of Marc Marquez, finishing runner-up in the championship over the last two seasons and almost winning the 2017 title for Ducati.

Now, the 33-year-old is set to dip his toes into the world of four-wheeled motorsport (albeit not for the first time in his career, having taken part in a Lamborghini Super Trofeo event in 2016) as he takes part in the third round of the DTM season in Misano next month. He’ll drive for the WRT Audi squad – an appropriate move, given that Audi owns Ducati.

Although DTM has recently introduced a ‘wildcard’ system for manufacturers to race an extra car at certain rounds, interestingly this isn’t how Dovi will be taking part. Instead, he’s acting as a replacement driver for Pietro Fittipaldi, who’ll be busy that weekend performing his reserve driver duties for Haas in Canada.

Dovizioso has already had a brief run in a DTM car and will manage to squeeze in a couple of days of testing at Misano before the race weekend. He said of his opportunity:

“I love cars and I feel lucky to be able to race with the Audi RS 5 DTM. “It’s tough to find the time to prepare for it during the MotoGP season but I am really looking forward to competing in such a high-level context as the DTM.

“The car is amazing, but it’s a different challenge compared with my Desmosedici GP and I need to get prepared, so I did many laps in the simulator before stepping into it for the first time. Misano is a special track for every Italian driver and the place where I scored an incredible win last year so I’m very excited and thankful for this opportunity.”

It’s rare for active MotoGP riders to make actual race appearances in high-profile four-wheeled championships; Valentino Rossi dabbled in the World Rally Championship in the 2000s and Jorge Lorenzo has competed in the Race of Champions. Other than that, they’re usually restricted to test appearances – like last year, when Dani Pedrosa and Marc Marquez had an F1 test with Red Bull.

How will he get on in what is an ultra-competitive series? Hopefully, rather well, but it’s mainly irrelevant – we just think it’s awesome whenever someone steps outside their comfort zone to try something else. Best of luck to ya, Dovi! 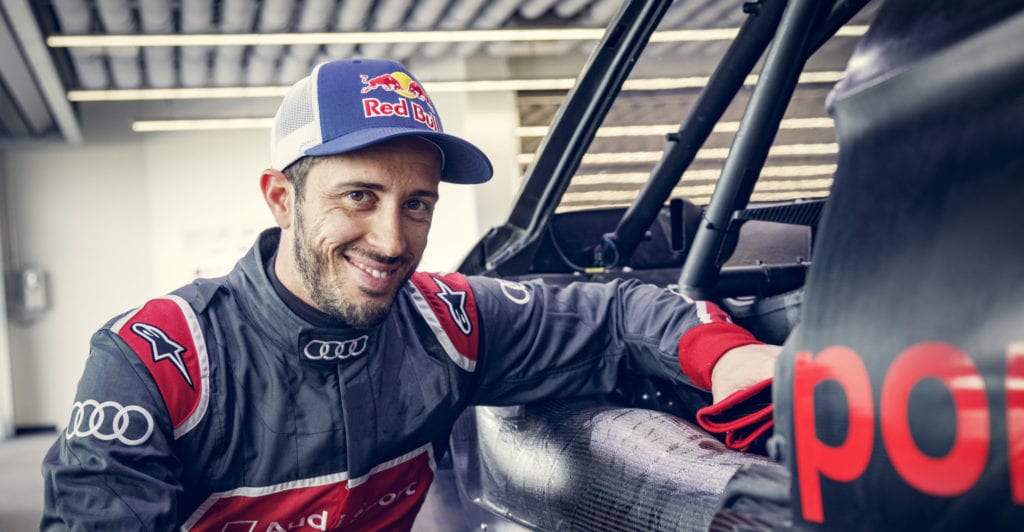