No Man Can Stop Johan From Winning Another World Rallycross Event

We’re getting to the point where we wonder if we even need to write these reports anymore. Yesterday, at the World Rallycross of Germany, Johan Kristoffersson did what he has been doing so very well all season – he won.

To put into perspective just how dominant he has been this year, this was his eighth final win on the bounce. The only driver to deny him this season has been nine-time world rally champ, Sébastien Loeb. That is astonishing. Astounding. The man is a winning machine.

On Saturday, he shared the spoils with team-mate Petter Solberg. But on Sunday, normal service was very much resumed as Johan won his semi-final to put himself on pole for the final, alongside Mattias Ekstrom. Behind them were Andreas Bakkerud and Solberg, followed up by the only Peugeot driver to make the final, Kevin Hansen, and Niclas Gronholm.

The race got underway but was quickly red flagged after Hansen suffered a heavy shunt. He was taken to hospital and thankfully is fine.

With only five drivers lining up on the grid for the restart, the final got underway again. Kristoffersson made a good getaway, maintaining his position as Ekstrom tried to sneak around the outside. Ultimately, he could find no way past and so slotted into second ahead of team-mate Bakkerud. Solberg won the Super Charge award but only ran in fourth, with Gronholm at the back of the queue. As a result, the Finn decided to get his joker lap out of the way on lap one.

Initially, Ekstrom looked to be challenging Kristoffersson as he hung on to his coattails, but there really was no way past for him. At the back, the battle between Gronholm and the recently jokered Solberg was hotting up, with the former attempting to slide his car around the outside of Petter into turn one. Although the move didn’t stick, it made for excellent viewing.

Bakkerud looked to be having his own race, with Kristoffersson banging in fastest laps of the day up front and pulling away. He took his joker on lap three, a good move from the Audi team to help quash any pressure that Solberg might put on Ekstrom for second later on in the race. This turned out to be relatively unnecessary though, with Solberg being forced to stop on lap five with an engine issue.

The top two jokered on the very last lap, meaning positions remained the same. Kristoffersson extended his lead at the top, and Ekstrom moved just four points clear of Bakkerud in second in the championship standings with just the one race remaining. The PSRX Volkswagen Sweden Team also became uncatchable at the top of the team championship, meaning that like Kristoffersson, PSRX won it for the second year in a row. The 2018 FIA World Rallycross Championship is nearly at its end, with just the round in Cape Town remaining. Will there be another winner this season? Or will Kristoffersson win an unprecedented eleven out of twelve rounds? Tune in next time to find out!

The 2018 FIA World Rallycross Championship is nearly at its end, with just the South African round in Cape Town remaining. Will there be another winner this season? Or will Kristoffersson win an unprecedented 11 out of 12 rounds? Tune in next time to find out! 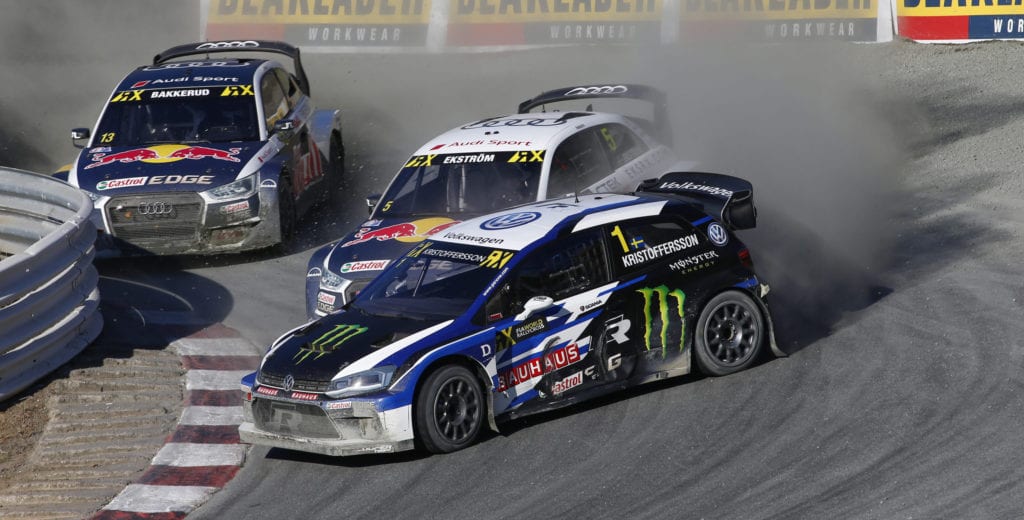