Super Lando, super Lando – what a race for Norris! He did a brilliant job fighting with the Mercedes cars throughout the race on pure pace. Still, he was naturally a little disappointed by the penalty he got for his incident with Sergio Perez that potentially cost him second.

Lando had the racing line when Sergio Perez tried to go round his outside at Turn 4 after the Safety Car restart. Lando was on the racing line, and Checo tried to stay with him but ran out of room and went into the gravel. The stewards gave him a five-second penalty for forcing a driver off the track.

Funnily enough, Lando disagreed with this.

“I thought that lap one was just racing, really. [Perez] tried to go round the outside which was a bit stupid, and he ran off the track himself. I didn’t push him. I’m frustrated, but I’m also happy with P3, we had a very good pace, and I’m happy.

“It was a lot of fun, a good race, it was exciting. But I’m disappointed because we should’ve been in second place.”

Norris also picked up two penalty points for the Perez incident, which takes his total up to ten in the last 12 months. If a driver reaches 12 points, they get a race ban, but Lando Norris fans will be happy to note that two points expire off his licence on 10th July this year.

Lando stayed in second and held off Lewis Hamilton for 20 laps, and the seven-time champion was impressed, saying: “Such a great driver, Lando.” Bottas then got past in the pitstop because of Lando’s penalty leaving Lando in fourth.

Damage for Lewis let them both close up, and whilst Bottas was waved through, Norris had to fight past and overtook Lewis and set about catching Bottas. He tracked the Mercedes until the end but couldn’t get back past. Without the penalty, he thinks he would’ve stayed ahead. Either way, racing with the Mercedes is huge for McLaren.

“I think we had good pace. I could keep up with him, even with the dirty air. But as soon as I got within DRS or close to one second, I started struggling too much.

“Should’ve, would’ve, could’ve in the end. It’s nice to know that we can be there, we can race them. It’s the first race in many years of actually racing the Mercedes and Red Bulls. Hopefully, we’ll keep it up next time.”

Today’s third place was Lando’s third podium in nine races and puts him only three points off third in the drivers’ standings. He’s definitely a threat to Mercedes and Red Bull in the future. 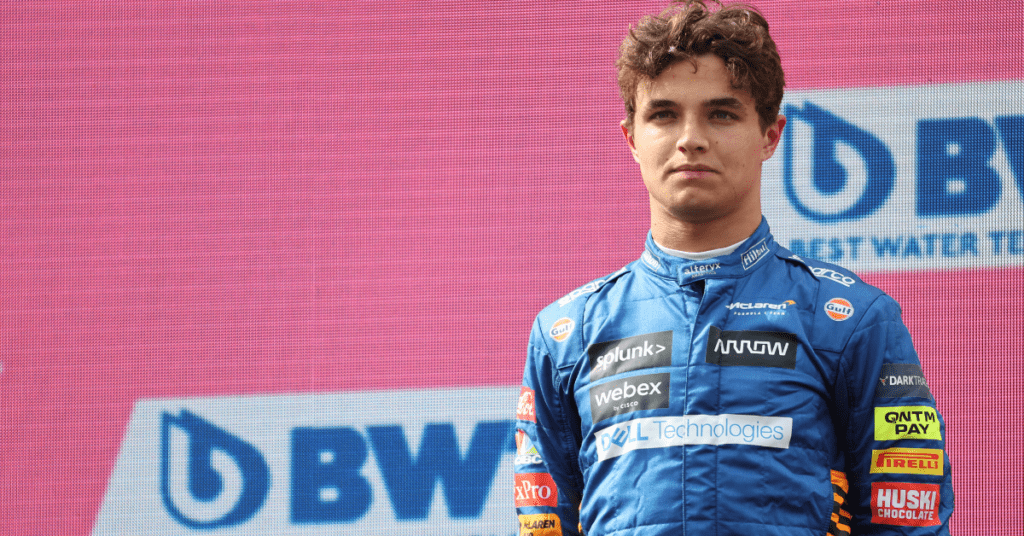