Norris Reflects On His Best-Ever Qualifying After Missing Out On Pole By 0.048s – WTF1
Skip to content
×
Formula 1 , News

Norris Reflects On His Best-Ever Qualifying After Missing Out On Pole By 0.048s

Whoa, GUYS. Lando qualified second! Second! An incredible job and soooooo close to pole position 🤏 We shouldn’t really be shocked, though, to be honest. Norris just keeps pulling out these outstanding performances week after week.

He was only 0.048s behind Max Verstappen, and for most of the lap, he was ahead of the Red Bull driver. For a moment, it looked like Lando could snatch pole. It was only really in the last corner where he lost time.

This is McLaren’s first front row start since 2012. The team were obviously ecstatic, but Lando was being a classic racing driver and wanted more; he’s just always looking ahead.

“I’m happy enough. I’m happy with P2,” he said to Sky Sports after the session. “I’m super happy, of course, mixing it with the big guys!

“I’m a racing driver, I’ve got to blame that they’re in a better car, so they’re able to do things that I’m not, which is true. But yeah, I don’t have any excuses. We are where we are. I feel like I pretty much maximised everything. Even with the last corner, it was the best last corner that I did, but we’ve just struggled there since day one here. It’s just one of the corners we have a bit of a weakness in.

“But I don’t need to talk about that; I’m really happy with P2. My best qualifying in F1, one of my best laps, and yeah, it’s a good feeling.”

Lando was fantastic all the way through qualifying. He was always near the top of the timing sheets straight out of the blocks in Q1. His teammate Daniel Ricciardo was nearly a second behind. Lando was just on fire, and he peaked at the best time.

“Actually, I was slower on the straights than my previous best lap because I didn’t have as much of a slipstream. But I made up for it in the corners. I had a better exit out of turn one, which also helped. Max was what, four seconds ahead of me, which still helps and is better than nothing. Maybe there could’ve been a little more if I had that little tow from another car ahead of me, but I also would’ve lost a little bit more in the corners. So it’s just the way it is sometimes. Sometimes you lose, sometimes you gain.”

He started third last week and kept the position for the first few laps but was soon overtaken by Sergio Perez and Valtteri Bottas behind. He didn’t try to fight them and just let them past so he could do his own race and keep the tyres alive for the best points finish. Perhaps he will fight more tomorrow now he’s gone one better this week. Who knows!

“First few corners we have a chance, just like last weekend to do something and to gain a place, yeah I want to be positive and go we’re gonna have an awesome race, but I know it’s not going to be incredible.

“We’re not as quick as [Red Bull and Mercedes]. Maybe today we are when we have low fuel, new tyres, but our car is simply not as quick as their car. That’s why they’re able to be so much quicker in the race than we are. The car is a lot more on the limit, a lot less forgiving and so on. Yeah, we have a worse car, but I’m still P2, so I’m happy with my job.”

Where do you think Lando will finish tomorrow? 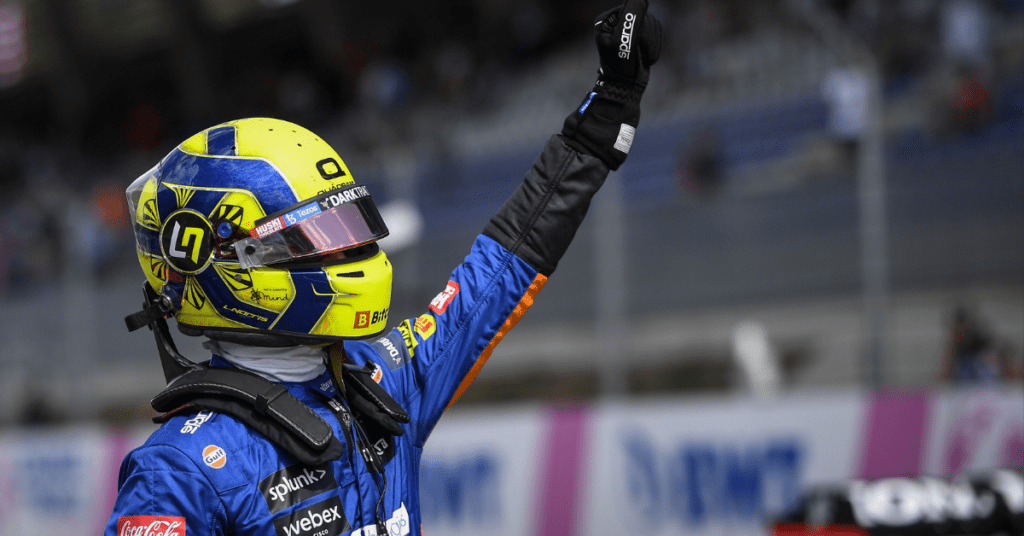