On This Day In F1 – 13 Drivers Crashed Out In One Lap During A Freak Hail Storm – WTF1
Skip to content
×
Formula 1 , On This Day

1952 British Grand Prix
Alberto Ascari took his third win on the bounce ahead of Piero Taruffi, but it was Mike Hawthorn – in just his second grand prix – who took third place in his Cooper-Bristol.

1958 British Grand Prix
Never mind a grand prix with a winner, how about a grand prix with a home top four? That’s what happened at Silverstone in 1958 as Peter Collins led home Mike Hawthorn in a Ferrari one-two, with Roy Salvadori third in a Cooper, and Stuart Lewis-Evans fourth for Vanwall.

1969 British Grand Prix
Jackie Stewart and Jochen Rindt became engaged in an epic battle for the lead which lasted for most of the race as they swapped positions multiple times. Unfortunately, Rindt’s challenge began to fade as the race passed half distance due to a piece of bodywork from his Lotus 49 rubbing against his tyre. Stewart took the lead and went on to win as Rindt pitted for repairs, and then again for fuel. That promoted Jacky Ickx to second, Bruce McLaren to third, and left Rindt – who’d still yet to win a race – in fourth.

It capped an unhappy weekend for the Lotus team, which had earlier seen a bizarre situation unfold with Rindt’s teammate, Graham Hill. At the time, Colin Chapman had been trying to push development of a four-wheel drive car, the Lotus 63. But despite his conviction that it was the way to go, the problem was that neither Rindt nor Hill were particularly keen on driving it, meaning Lotus third driver John Miles was left to race the car.

Ahead of the weekend Chapman tried to force the situation and had sold Hill’s 49, theoretically leaving him no choice but to race the four-wheel drive 63. A furious Hill had other ideas, however – he disliked the car so much that after practice, he did some sort of deal with fellow racer Jo Bonnier – who’d privately entered a 49 – and swapped cars with him! Hill finished the race a lowly seventh, but that was better than either of the drivers of the 63 managed – Bonnier’s engine failed after just six laps, while Miles finished 10th and last, nine laps down. Madness!

1975 British Grand Prix
The race was already crazy as wet/dry conditions saw eight lead changes between seven different drivers, with Emerson Fittipaldi eventually finding himself and his McLaren M23 at the front and looking strong.

Emerson had cleverly pitted for wet tyres and, since all of his closest rivals were caught in the catch fencing, was declared the winner when the red flag was shown on lap 56. There were no countback rules back then so Fittipaldi won from Pace and Scheckter, even though they were in the wall, because the only other cars still running (aside from Fittipaldi) were more than a lap behind. Those other drivers who didn’t crash were Vittorio Brambilla, Niki Lauda, Alan Jones, Mario Andretti and Clay Regazzoni.

Although he was only 29 at the time and still the reigning world champion, this would turn out to be Emerson’s 14th and last F1 victory. From 1976 to 1980 he made the disastrous call to race for his own Fittipaldi team, which yielded no more than a couple of podiums in largely uncompetitive cars. 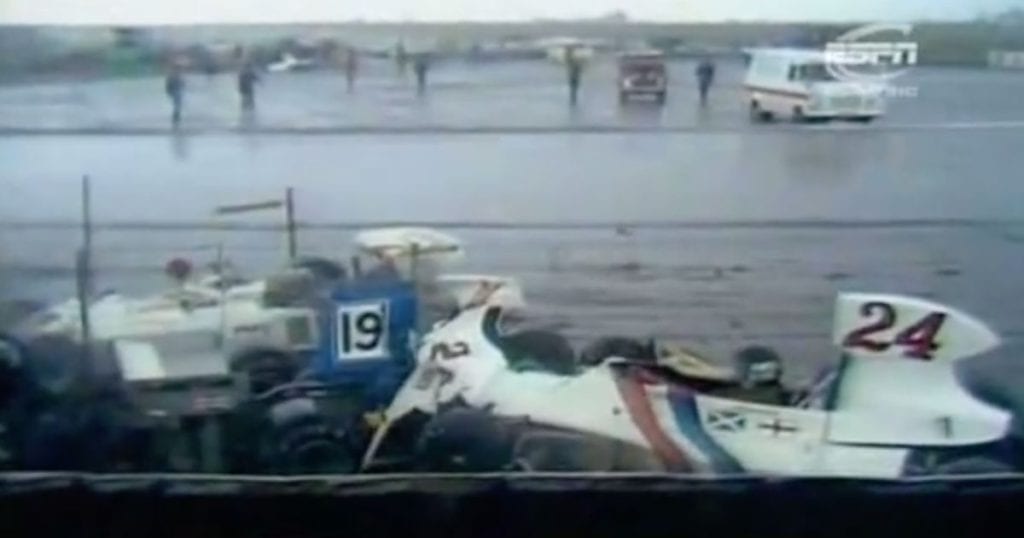