On This Day In F1 – A Struggling Schumacher Saw Off Both Williams Drivers – WTF1
Skip to content
×
Formula 1 , On This Day

1958 Belgian Grand Prix
Tony Brooks won for Vanwall after early challenger Peter Collins had to retire with an overheating car. Mike Hawthorn was second ahead of Stuart Lewis-Evans and Cliff Allison, who scored the first points for Team Lotus.

1986 Canadian Grand Prix
Nigel Mansell won relatively easily after an early challenge from Keke Rosberg’s McLaren faded. Alain Prost had to fight his way through to second after dropping down the order following a slow pit stop. Nelson Piquet finished second ahead of Rosberg, with Ayrton Senna a lap down in fifth.

1997 Canadian Grand Prix
Michael Schumacher took a slightly lucky win ahead of Jean Alesi and Giancarlo Fisichella when leader David Coulthard had a clutch issue which cost him the lead – just before a race-ending red flag was deployed. Olivier Panis was charging through the field after losing his wing on the first lap and had made his way up to seventh when his Prost suffered a suspension failure. Panis hit the wall hard at Turn 5, breaking both of his legs and ruling him out of most of the rest of what had been a very promising season.

2003 Canadian Grand Prix
Just 4.4 seconds covered the top four drivers at the end of a race in which Michael Schumacher had to drive smartly to get to the finish. His Ferrari had fading brakes and the Bridgestone tyres weren’t performing as well as the Michelins on the Williams, yet he stayed ahead of Ralf Schumacher and Juan Pablo Montoya, with Fernando Alonso even getting involved at the end. It was probably a race one of the Williams drivers should have won – the car was much faster, but Montoya spoiled his chances with an early spin and after losing the lead in the pit stops, Ralf never really put his brother under as much pressure as he perhaps should have done.

Birthdays
Riccardo Paletti (born 1958) made his debut with the uncompetitive Osella team in 1982 and only managed to qualify for two of the first seven races. He made the field for a third time in Canada, only for it to end in tragedy. Unsighted at the start, he ran into the back of Didier Pironi’s stalled Ferrari and died at the age of just 23. 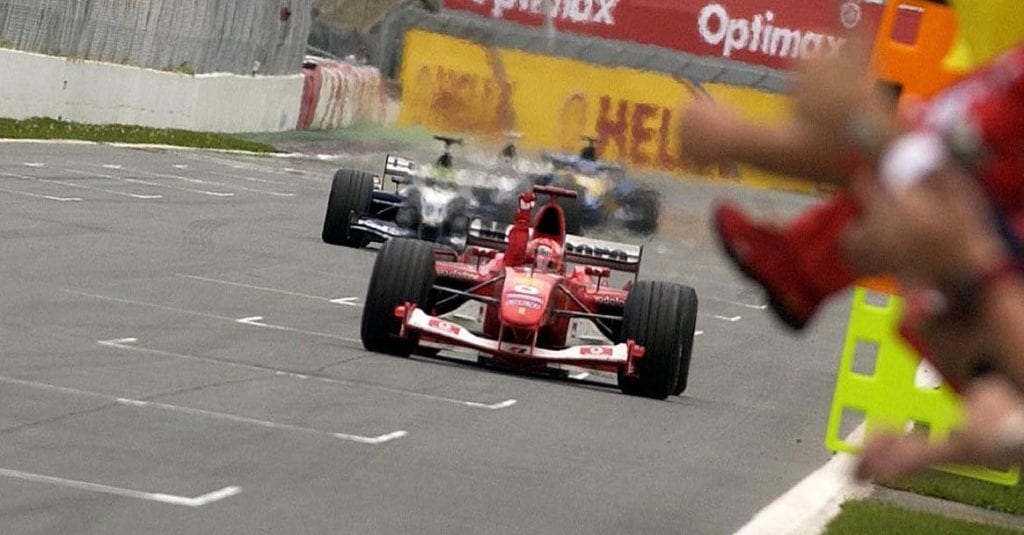