On This Day In F1 – Grosjean Scored An Unlikely Podium – WTF1
Skip to content
×
Formula 1 , On This Day

On This Day In F1 – Grosjean Scored An Unlikely Podium

1953 Swiss Grand Prix
The original version of ‘Multi 21’ happened in the 1953 Swiss GP at Bremgarten. Alberto Ascari led much of the race before having to pit for repairs. He dropped to third behind Ferrari teammate Giuseppe Farina and Mike Hawthorn, at which point the team issued the order to hold station. Ascari had other ideas, passed them both and went on to win, taking his second championship in the process.

1959 Portuguese Grand Prix
The rear-engined Coopers dominated around the tricky parkland Monsanto course, with Stirling Moss beating teammate Masten Gregory by a whole lap. Jack Brabham had been in the mix too, but crashed out while lapping a backmarker. Brabham was flung from his car in the process and landed right in the middle of the track – fortunately everybody avoided him and he was alright.

Dan Gurney managed to muscle his front-engined Ferrari into third place, but as if it wasn’t already clear, the rear-engined revolution was now well and truly underway.

1964 Austrian Grand Prix
The first world championship Austrian Grand Prix was held at the Zeltweg Airfield – perhaps one of the most unloved F1 tracks of all-time. As well as having an uninspiring layout (just the four corners) and offering poor views for spectators, it was also ferociously bumpy to the point where many cars were literally being shaken to bits. Ferrari’s Lorenzo Bandini (the best racing driver name ever) took his first and ultimately only victory ahead of Richie Ginther, with privateer Bob Anderson taking third in a Brabham. The race was not a success and organisers were told that if they wanted an Austrian GP on the F1 calendar, it would have to be at a different circuit. And that’s how the legendary Osterreichring was born…

2009 European Grand Prix
Speaking of unloved circuits, remember Valencia? Rubens Barrichello won the 2009 race for Brawn ahead of Lewis Hamilton and Kimi Raikkonen. It was his first win for almost five years and an immensely popular one, too. This race also marked the return of Luca Badoer, subbing for the injured Felipe Massa, but the less said about that, the better…

2015 Belgian Grand Prix
Lotus was in a bad way during 2015, and around the time of the Belgian Grand Prix the team was literally on the brink of collapse. But the combination of the Mercedes engine and an absolutely stirring drive by Romain Grosjean put him in an incredible fourth place with just a couple of laps to go. Then, Sebastian Vettel’s tyre exploded. That promoted Grosjean to an unlikely podium, finishing only behind the two Mercedes’ of Lewis Hamilton and Nico Rosberg.

Birthdays
A typical 1950s one-race wonder, Dries van der Lof (born 1919) drove in his home race, the Dutch Grand Prix, in 1952. Driving an HWM, he finished the race, albeit so far behind winner Ascari (20 laps, to be precise) that he wasn’t classified. 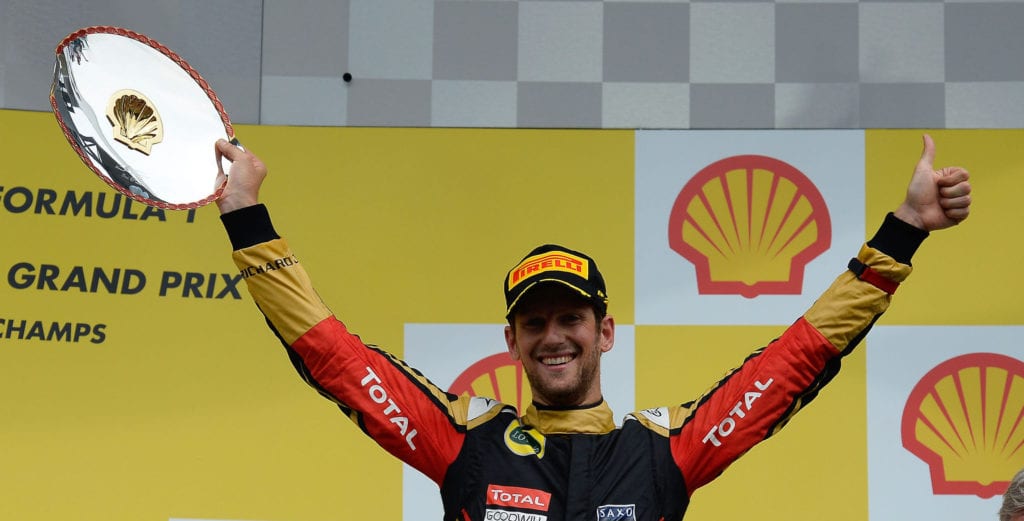