1981 Canadian Grand Prix
In a wet race, Jacques Laffite took his seventh and final F1 victory for Ligier ahead of John Watson. It also put him back in the championship fight with one race to go as Nelson Piquet only finished fifth, with Carlos Reutemann down in 10th. Despite Alan Jones also failing to score, Williams won the constructors’ championship for the second year in succession.

Gilles Villeneuve put in a typically Gilles performance. After a small collision, his front wing was left sticking up in the air, blocking his vision. But instead of pitting for repairs, he kept on going for a few laps – obscured vision and all – until it fell off. Able to see properly again, he carried on to the end and finished third, without a front wing.

1987 Spanish Grand Prix
After passing Nelson Piquet on the opening lap, Nigel Mansell shot off to secure a comfortable victory ahead of the McLaren’s of Alain Prost and Stefan Johansson. Piquet could only manage fourth after an early spin, ending his streak of nine consecutive podiums.

1992 Portuguese Grand Prix
Five years later, Mansell scored his ninth victory of the season at Estoril, setting a record for the most wins in a season, as well as the most points in a season (108). Gerhard Berger was second, Ayrton Senna third.

1998 Luxembourg Grand Prix
Hosted at the Nurburgring, the penultimate race of the season was a critical one for Mika Hakkinen’s title chances – and he absolutely delivered. Running third in the early stages, he managed to pass Eddie Irvine before reeling in Michael Schumacher and passing him during the pit stops.

He just about held on to win by 2.2 seconds, with David Coulthard over half-a-minute behind the pair in third. The result meant Hakkinen took four-point advantage over Schumacher in the championship to the final race at Suzuka. It was one of the Finn’s best victories, but Ron Dennis went a step further at the time and claimed it was the best win of McLaren’s history too!

2009 Singapore Grand Prix
Lewis Hamilton coaxed his McLaren MP4-24 to a second win of the season. Timo Glock finished second while Fernando Alonso scored his only podium of the year in the wildly uncompetitive Renault R29.

He decided to dedicate his podium to his manager and former team boss Flavio Briatore – a bold and amusing move, given that Crashgate had only just come to light! Speaking of crashgate, during practice, a rookie Romain Grosjean managed to crash his Renault at exactly the same corner as Nelson Piquet Jr. had the year before. You couldn’t make it up…

It could have been quite a different podium, however. Nico Rosberg was right in the mix at the start for Williams, but crossed the white line at the pit exit and was hit with a drive-through penalty. Sebastian Vettel looked like he might have been able to challenge Hamilton, too, before he was nailed for speeding in the pit lane.

2015 Japanese Grand Prix
Lewis Hamilton passed Nico Rosberg at the start and went on to take his 41st victory, equalling Ayrton Senna’s tally. However, the most memorable moment came courtesy of Fernando Alonso, who used the opportunity of racing in Honda’s own backyard to criticise the power unit by calling it a “GP2 engine”. And thus, a meme was born… 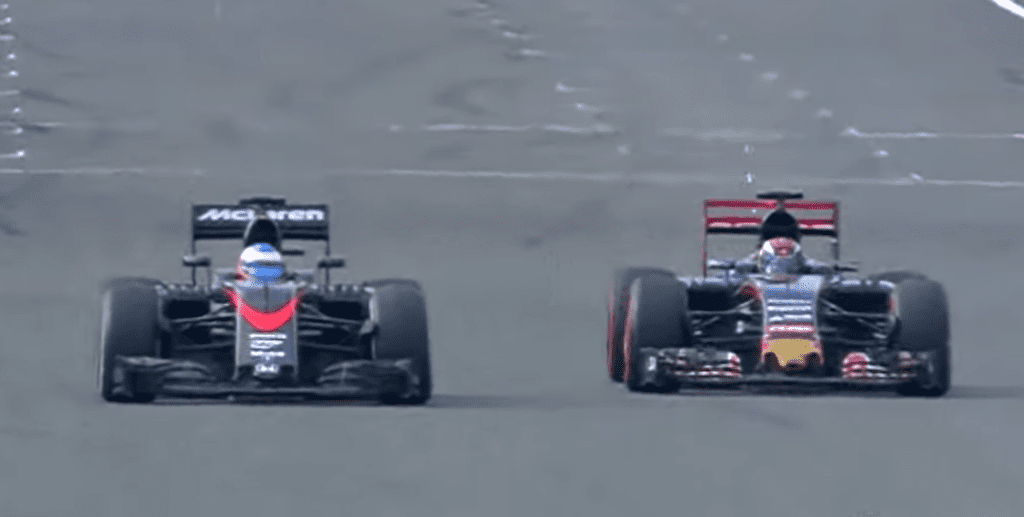