1984 Detroit Grand Prix
Rookie Martin Brundle in the unfancied Tyrrell put in a star performance to finish an incredible second, even challenging winner Nelson Piquet in the closing stages, with third-place Elio de Angelis some way behind. However, later that season the Tyrrell team would be disqualified from the entire season for illegally adding ballast to the cars during the races, stripping Brundle of his podium. That promoted de Angelis to second and Teo Fabi to his maiden podium in third.

1990 Mexican Grand Prix
Alain Prost put in one of his finest drives to go from 13th on the grid to win, having spent most of the build-up to the race working on a race setup and effectively sacrificing qualifying on a weekend where tyre wear was a critical factor. Indeed, Ayrton Senna dropped out of second place late on with a tyre blowout.

However, the whole race was completely dominated by Nigel Mansell’s overtaking move for second on Gerhard Berger. Heading into the fearsome, high-speed, banked Peraltada turn with a couple of laps to go, Mansell launched his Ferrari around the outside of Berger and made it stick, completing one of the most famous passes in F1 history.

2001 European Grand Prix
Michael Schumacher won from pole after main rival Ralf Schumacher spoiled his own chances by crossing the white line on the pit exit, earning himself a stop-go penalty. That dropped him to fourth, with Juan Pablo Montoya and David Coulthard moving up to second and third.

2012 European Grand Prix
One of the best races in a season of brilliant races was incredibly won by Fernando Alonso. Starting 11th on the grid at the Valencia street circuit, a track where overtaking had previously been non-existent, few gave him much hope. But in the race, he set about pulling off a number of brilliant overtakes. He made his way up to third and, on the same lap where he took second off of Romain Grosjean, leader Sebastian Vettel’s Red Bull broke down.

Alonso carried on to win ahead of Kimi Raikkonen, while the battle for third went down to the final laps. Pastor Maldonado was on course for a podium (yes, really) when Lewis Hamilton attempted to pass him, only for the two to collide, dropping Maldonado down the order and putting Hamilton out of the race. That gave the position to Michael Schumacher, who scored the first podium of his comeback, and the last one of his career.

2018 French Grand Prix
Formula 1 returned to France for the first time in 10 years at the Paul Ricard circuit. Sebastian Vettel made a bit of a mess of the first corner as he collided with Valtteri Bottas, leaving Lewis Hamilton to cruise to victory ahead of Max Verstappen and Kimi Raikkonen. Vettel recovered to fifth, while Bottas (with a damaged car) could only muster seventh.

Birthdays
The great Juan Manuel Fangio (born 1911) spent his early career racing in his native Argentina before moving across to Europe after the Second World War. He was the benchmark driver of the 1950s, five championships for all manner of different manufacturers – Alfa Romeo, Maserati, Mercedes and Ferrari. With 24 wins from just 51 starts, Fangio is still widely regarded as one of the greatest F1 drivers of all-time 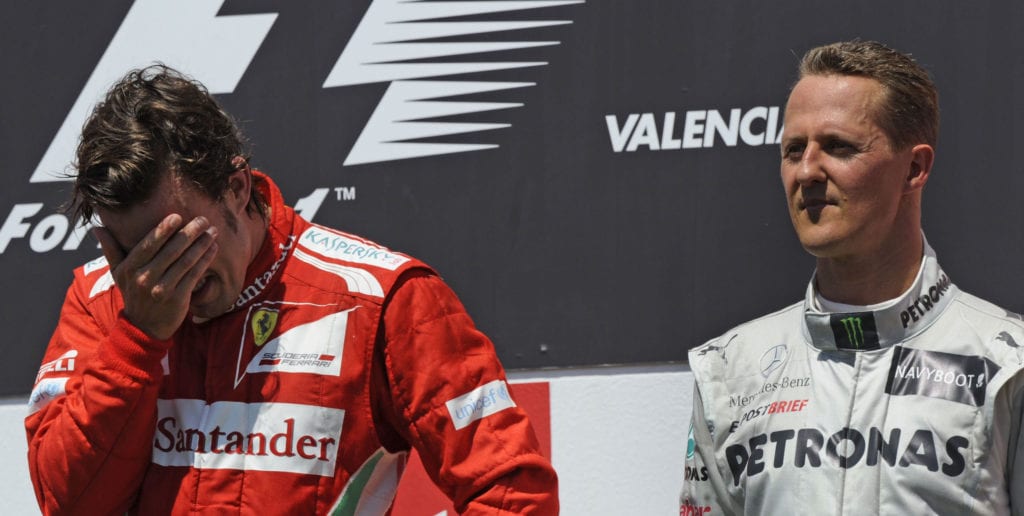