On This Day In F1 – Barrichello Got Really Excited About Winning At Monza – WTF1
Skip to content
×
Formula 1 , On This Day

1985 Belgian Grand Prix
Ayrton Senna’s second F1 victory came – much like the first – in wet conditions. With rain falling before the start he quickly established a lead which he held for pretty much the entire race. In fact, the top five finishers in the race make for quite the list: Senna, Nigel Mansell, Alain Prost, Keke Rosberg, and Nelson Piquet. By the end of their careers they had 12 championships between them – had Niki Lauda been racing (he withdrew after injuring his wrist in a practice crash) that number could well have been bumped up to 15.

Here are some highlights of the race, being voiced over by none other than Senna himself:

2002 Italian Grand Prix
There was a bit of a mix-up between the Williams drivers at the start. As pole-sitter Juan Pablo Montoya defended from Michael Schumacher on the run down to the first corner, Ralf Schumacher swept past both of them – but cut the chicane in the process. That led to a clumsy swapping of positions a few laps later, but it didn’t make a difference – Ralf’s engine blew up early, whilst Montoya quickly slipped behind the Ferrari’s before eventually retiring. Rubens Barrichello saw off his teammate to win his first Italian GP for Ferrari and as you’d expect, he was rather happy about it.

Eddie Irvine joined them on the podium for his and Jaguar’s final podium, so in a way, it was sort of an all-Ferrari top three. 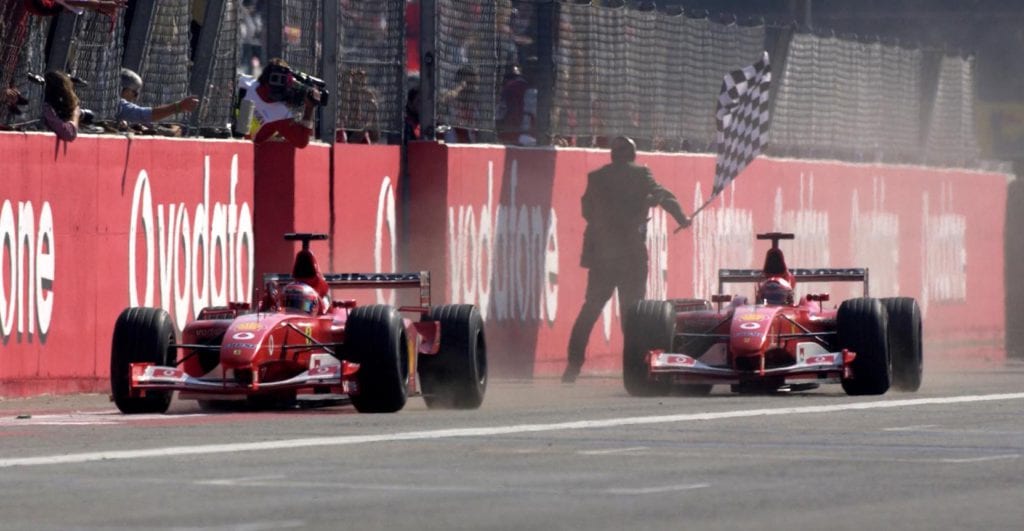