On This Day In F1 - Barrichello Won His First Race From 18th On The Grid - WTF1
Skip to content
×
Formula 1 , On This Day

1972 German Grand Prix
One of the masters of the Nordschleife, Jacky Ickx took his eighth and final career win with a dominant drive. He started on pole, set the fastest lap and led every lap, joining an elite club of drivers – Jim Clark, Juan Manuel Fangio and Alberto Ascari – to achieve a grand chelem on Formula 1’s most infamous circuit. Clay Regazzoni finished second after colliding with Jackie Stewart on the final lap, with Ronnie Peterson third.

1978 German Grand Prix
Mario Andretti won once again as Ronnie Peterson’s gearbox failed with just a few laps to go, denying Lotus a one-two. Having dropped to last on the first lap, Jody Scheckter fought his way back up to second by the finish with Jacques Laffite third. This was also the first grand prix for future three-time champion Nelson Piquet. It was a muted start to his career – driving for the Ensign team, he qualified 21st and was running 12th when his engine failed with 14 laps remaining.

1989 German Grand Prix
Ayrton Senna and Alain Prost were virtually glued together for much of the race as Senna led the early stages, then Prost took over out in front after the pit stops. He held off Senna for several laps only to be slowed by a gearbox issue, handing Senna the win. Prost was still able to finish second with Nigel Mansell a distant third in his Ferrari. 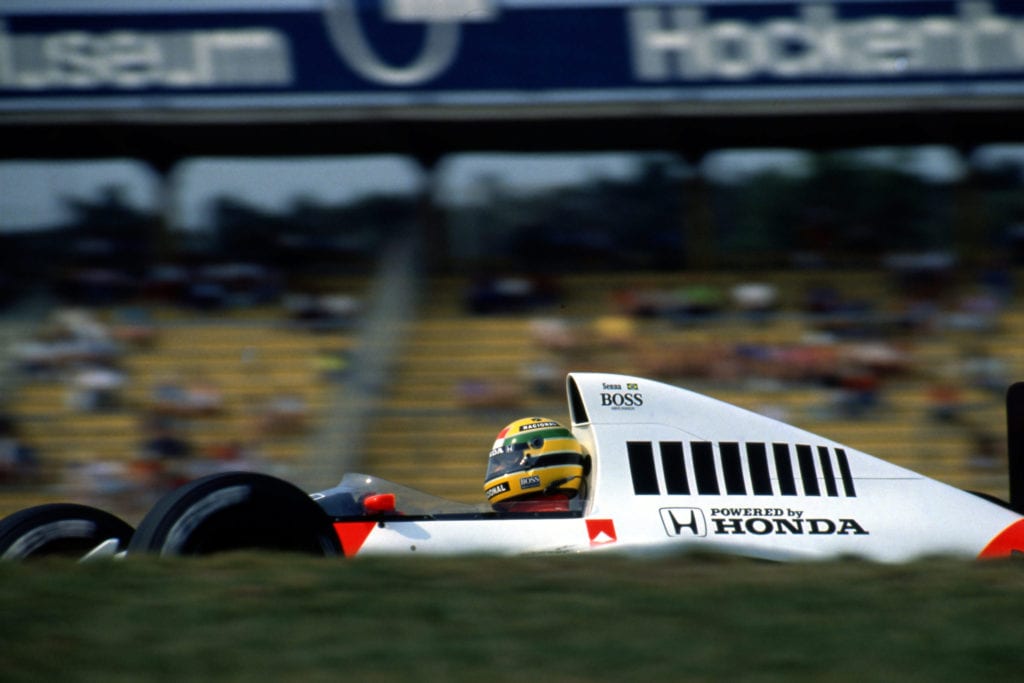 1995 German Grand Prix
Damon Hill led the opening lap as he sought to close down Michael Schumacher’s championship lead, only to end up spinning off at the start of the second lap – the result of a halfshaft failure, not driver error. Schumacher went on to win his home race for the first time, with David Coulthard second and Gerhard Berger third.

2000 German Grand Prix
Mika Hakkinen and David Coulthard were looking set to deliver a crushing one-two for McLaren when the race was turned upside-down by two events. Firstly, a disgruntled former Mercedes employee ran onto the track as a form of protest, bringing out the safety car and eradicating the lead held by the two Mercedes-powered McLarens. Then, shortly after racing resumed, rain started to fall, prompting much of the field to pit for wets.

However, due to the fact that old Hockenheim was a rather long circuit, not all parts of the track were wet and a few drivers elected to stay on slicks. One of those was Rubens Barrichello, who’d started way down in 18th. He made rapid progress in the early laps, and then closed up to the leaders thanks to the safety car. Staying out on slicks gave him the lead and on top of that, also turned out to be the right call – second-placed Hakkinen wasn’t quick enough to catch him until the final lap, by which point Rubens had a big enough gap to hang on and emotionally win his first grand prix. Hakkinen finished second with Coulthard third, just ahead of a rookie Jenson Button – he’d done the opposite to Barrichello and benefitted from being one of the first drivers to switch to wets as he almost pinched a podium from the slick-shod Coulthard. Button always was handy in changeable conditions… 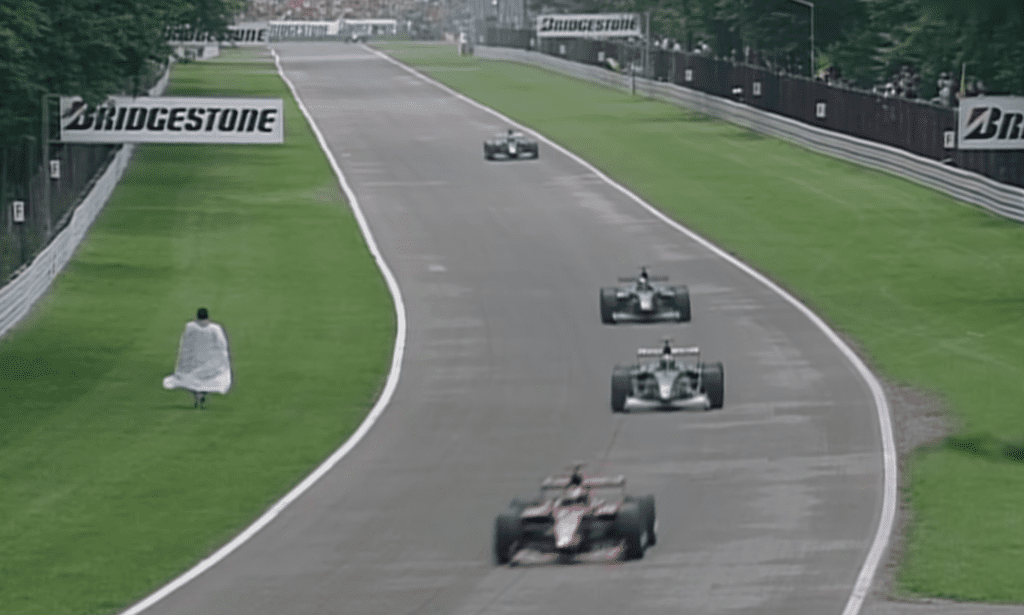 2006 German Grand Prix
Michael Schumacher and Felipe Massa finished a comfortable one-two for Ferrari, with pole-sitter Kimi Raikkonen third. The Renault drivers of Fernando Alonso and Giancarlo Fisichella finished a distant fifth and sixth in the first race after the banning of the tuned mass damper device, which Renault had previously used to great effect.

The idea was that a weight mounted in the nose of the car helped to keep the front end more level over the bumps, providing better grip and aerodynamics. The FIA had banned it on the grounds of being a movable aerodynamic device (even though it was located inside the car and made no contact with the airflow) – a controversial decision, especially given that the individual race stewards felt there was nothing wrong with it. 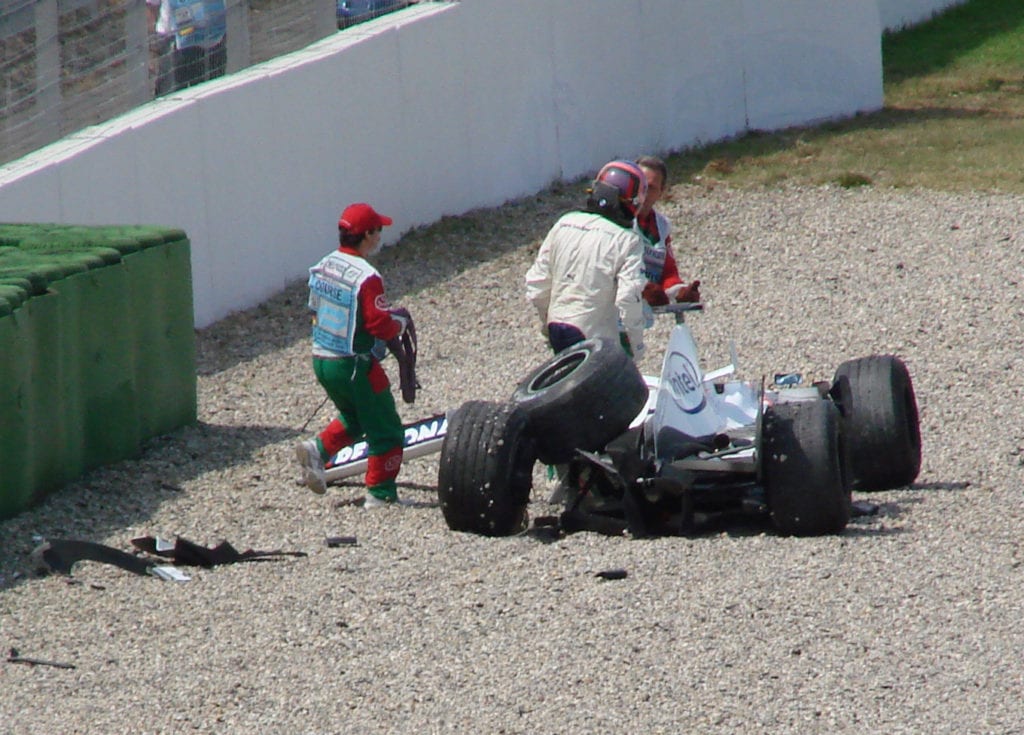 2017 Hungarian Grand Prix
Sebastian Vettel had a tough victory when his car was somehow damaged on the grid before the start of the race, leaving him with wonky steering for all 70 laps of the race. This allowed a train of his rivals to form behind him – though thankfully for Vettel, it was teammate Kimi Raikkonen in second. And despite the Finn’s requests for Vettel to either pick up the pace or let him go, he remained in second for the entire distance, providing a useful buffer to the two Mercedes drivers.

After Valtteri Bottas was unable to make any progress the team swapped the cars around to see if Lewis Hamilton could make any impact. He couldn’t, but honourably let Bottas back through into third on the final lap, with Max Verstappen – who’d wiped teammate Daniel Ricciardo out of the race on the first lap – a close fifth.