On This Day In F1 – David Coulthard Spun Off On The Warm Up Lap – WTF1
Skip to content
×
Formula 1 , On This Day

1961 Italian Grand Prix
The title battle between Ferrari drivers Phil Hill and Wolfgang von Trips had a tragic outcome. Von Trips was battling with Jim Clark on the second lap when the two collided on the approach to the Parabolica. Von Trips’ car was sent careering off the track, killing himself and 15 spectators. Phil Hill went on to win the race and the championship. It was also the final time F1 raced on the famous banking.

1967 Italian Grand Prix
Jim Clark almost pulled off the most incredible comeback drive of all-time. After getting a puncture and dropping a lap behind the leaders, he incredibly managed to gain back all of the lost time to the point where he actually re-took the lead with a handful of laps left to run. However, he was denied victory on the final lap as his Lotus started to cough with due to a lack of fuel. He dropped to third, with John Surtees just fending off Jack Brabham to win for Honda in what would be his final grand prix victory.

1972 Italian Grand Prix
Emerson Fittipaldi won his fifth race of the season to take his first title and become the youngest F1 champion – a record he held until Fernando Alonso won the championship in 2005. Mike Hailwood finished second for what would be the best result of his career and that of the Surtees team. Lotus also secured the constructors’ championship, despite Fittipaldi’s teammates not scoring a single point all year.

1978 Italian Grand Prix
There was a thrilling fight at the front between Gilles Villeneuve and Mario Andretti for most of the race. Andretti won, but both were penalised a minute for jumping the start. That handed Brabham a one-two, Niki Lauda ahead of John Watson, but the whole event was overshadowed by what had happened earlier in the day.

At the first start, a huge pile-up at the first corner left Ronnie Peterson with severe leg injuries. He wasn’t seen to be in a critical condition, but overnight he developed an embolism and passed away the following morning. It meant Andretti was declared champion, albeit in sombre circumstances.

1989 Italian Grand Prix
Alain Prost won after Ayrton Senna’s engine failed with nine laps to go. The Tifosi were delighted as Prost had recently signed a deal to race for Ferrari the following year, and to get in their good books he dropped his winning trophy off of the podium and into the crowd.

The win may have secured McLaren the constructors’ title but Ron Dennis loves trophies. He was absolutely furious at Prost’s gesture to the point where in future, he made it a part of his drivers’ contract that the trophies had to be given to the team afterwards.

1995 Italian Grand Prix
David Coulthard plonked his Williams on pole by over half-a-second, only to throw it all away by bizarrely spinning off during the warm-up lap.

Luckily he got a reprieve when the race was red-flagged following a crash, allowing him to retake his slot at the front of the grid. It made little difference as he retired from the race anyway, but there was still plenty of drama to come. Damon Hill was in the process of lapping Taki Inoue when he lost control and speared into Michael Schumacher’s Benetton, taking the pair of them out.

That left the Ferraris running first and second, but Gerhard Berger was put out of the race when a camera fell off of Jean Alesi’s car, hit Berger’s suspension and broke it.

Alesi then later retired, too, leaving Johnny Herbert to win the race.

2000 Italian Grand Prix
Michael Schumacher won from Mika Hakkinen to close the championship gap to just two points, but the event was overshadowed by a first lap accident. Five cars were sent out of the race following a collision at the second chicane and in the melee, an errant wheel struck marshal Paolo Gislimberti, who later died of his injuries.

2006 Italian Grand Prix
Michael Schumacher took victory as Fernando Alonso retired with engine failure, closing the gap in the championship to just two points. Kimi Raikkonen as second and Robert Kubica an excellent third in just his third grand prix. However, the big news came after the race when Schumacher announced that he would be retiring at the end of the season.

Birthdays
Bruno Giacomelli (born 1952) had sporadic entries for McLaren and Alfa Romeo in the late 1970s before finally getting a full season with the Italian squad in 1980. He often showed good speed, which culminated with an incredible drive in the season-ending US GP East at Watkins Glen. Starting from pole, he led the first half of the race comfortably until his Alfa Romeo did the very Alfa Romeo thing of breaking down.

Two more years with Alfa yielded a podium finish in Las Vegas, but he left F1 behind following a season with Toleman in 1983. Seven years later he made something of a comeback, but it was with the hapless Life team. Simply finishing a lap was an achievement and when he did, the car was often minutes (yes, minutes) off the pace. Unsurprisingly, he failed to make it through pre-qualifying at all. 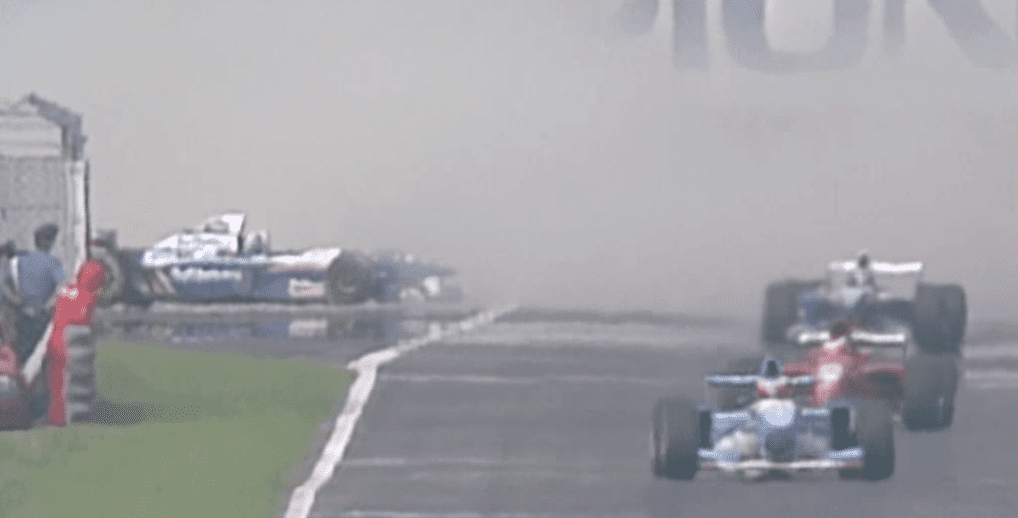