On This Day In F1 – Ferrari Team Orders Reached Their Most Ridiculous Levels – WTF1
Skip to content
×
Formula 1 , On This Day

1968 Spanish Grand Prix
Graham Hill took his first win since 1965 in the first race since his Lotus teammate Jim Clark had been killed in a Formula 2 crash at Hockenheim. Hill won the race after Chris Amon’s Ferrari suffered a fuel pump failure, with early leaders Pedro Rodriguez and Jean-Pierre Beltoise also falling by the wayside. Denny Hulme finished second, with Brian Redman finishing third in just his second grand prix.

1974 Belgian Grand Prix
Emerson Fittipaldi narrowly led home Niki Lauda to win at the unloved Nivelles circuit. Clay Regazzoni had led the first half of the race from pole but dropped to third after being shoved off the track by a backmarker. He eventually finished fourth as his Ferrari hit troubles on the final lap, promoting Jody Scheckter up to third. This was also the last race in which 1962 champions BRM scored points, courtesy of Jean-Pierre Beltoise in fifth place. Results fell over the coming years and the team eventually folded in 1977.

1991 Monaco Grand Prix
Ayrton Senna won his fourth Monaco GP but had a slightly surprising challenger in the first half of the race. Stefano Modena had qualified his Tyrrell on the front row and remained a couple of seconds behind Senna in the race as the pair pulled away from the rest of the field. Sadly, his superb drive was ended when his Honda engine failed in the tunnel, the oil from which caused third-placed Riccardo Patrese to spin out. Nigel Mansell ended up second ahead of Jean Alesi and Roberto Moreno.

2002 Austrian Grand Prix
Yep, it’s this race. In a season where Ferrari had already established itself as utterly dominant, Rubens Barrichello hooked up his weekend, qualified on pole, and dominated the entire race. But in its infinite wisdom, Ferrari decided that Michael Schumacher needed every point he could get and ordered Barrichello to move aside. Barrichello argued over the order for several laps but eventually obeyed the order – right at the finish line on the final lap.

The crowd heavily booed but as if that wasn’t bad enough, the podium ceremony turned into a farce. A sheepish Schumacher pushed Barrichello onto the top step and handed him the first-place trophy – a nice gesture for the true winner of the race, but the whole situation was a mess. The FIA fined Ferrari a million bucks for “not following podium procedure” and the incident was the main reason behind the FIA’s decision to ban team orders for the following season.

2013 Spanish Grand Prix
After starting fifth on the grid and then brilliantly sweeping around the outside of Kimi Raikkonen and Lewis Hamilton at Turn 3, Fernando Alonso and Ferrari embraced a four-stop strategy in a race where tyre wear was off the charts to win fairly comfortably from Raikkonen, with Felipe Massa finishing third.

This was the last time Massa stood on the podium as a Ferrari driver but incredibly, this would also turn out to be Alonso’s 32nd and final F1 victory – something nobody at the time could have even begun to predict.

2019 Spanish Grand Prix
Lewis Hamilton took the lead from teammate and pole-sitter Valtteri Bottas at the start – and that’s pretty much how things stayed as Mercedes recorded its fifth one-two finish in five races. Max Verstappen rounded out the podium in third, ahead of the Ferraris of Sebastian Vettel and Charles Leclerc.

Birthdays
Roy Salvadori (born 1922) was a prolific racer in the early days of the championship, starting 47 races between 1952 and 1962. His best season came in 1958 when he stood on the podium twice (with a best result of second in the German GP) and ended the year fourth in the championship.

Stefano Modena (born 1963) was an incredibly promising talent who achieved some great results with small teams in his 71 starts between 1987 and 1992. There was a podium at Monaco for Brabham in 1989 and a front row at the same track in 1991, followed by a career-best second for Tyrrell in Canada later that year. However, despite his speed, he’d gained a bit of a reputation as a car breaker, and dropped out of the sport after a difficult year with Jordan in 1992. 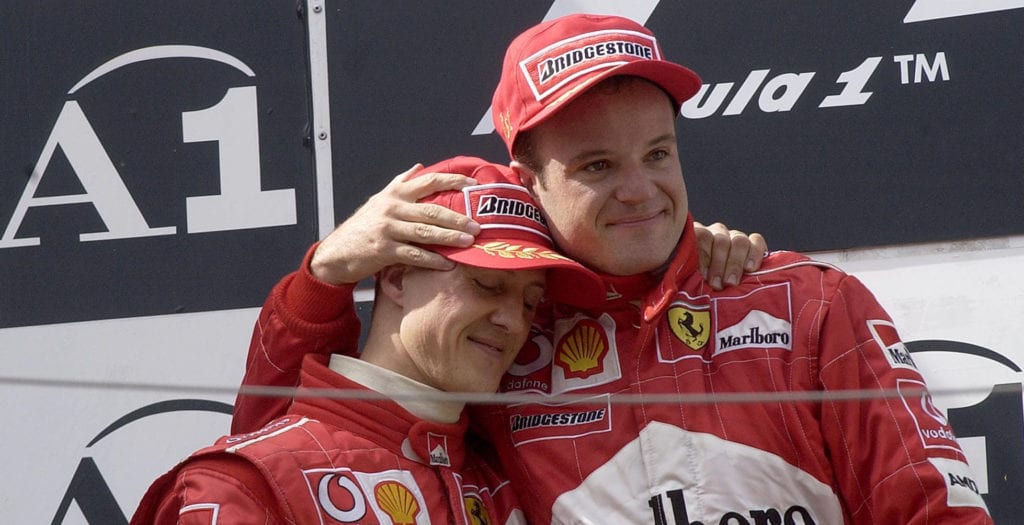