On This Day In F1 – Hakkinen Retired From The Lead On The Last Lap – WTF1
Skip to content
×
Formula 1 , On This Day

1973 Spanish Grand Prix
Ronnie Peterson had looked a certainty for victory until the gearbox on his Lotus broke, leaving teammate Emerson Fittipaldi to win after other front runners Jackie Stewart and Carlos Reutemann had retired. Francois Cevert finished second and George Follmer took third for Shadow, driving in just his second grand prix.

1979 Spanish Grand Prix
Patrick Depailler grabbed the lead from teammate Jacques Laffite on the first lap and went on to take an easy win after Laffite’s retirement. Carlos Reutemann finished second for Lotus with reigning champion Mario Andretti taking his first – and only – podium of the season.

1984 Belgian Grand Prix
F1’s last race at the Zolder circuit saw Michele Alboreto become the first Italian driver to win a race for Ferrari since Ludovico Scarfiotti had done so in the 1966 Italian GP. He utterly dominated, too, leading every single lap from pole position and beating second-placed Derek Warwick by more than 40 seconds. René Arnoux in the other Ferrari ended up third after Nelson Piquet’s Brabham broke down in the closing stages and Keke Rosberg ran out of fuel on the last lap.

2001 Spanish Grand Prix
2001 wasn’t the best season for Mika Hakkinen, who’d failed to even reach the podium in the first four races of the year. He was always an absolute beast at the Circuit de Catalunya, though, having won there for the previous three years, and was set to kickstart his season after jumping Michael Schumacher during the pit stops and then building up a sizeable lead.

However, on the final lap, Hakkinen’s Mercedes engine cried enough and went up in a plume of smoke with just half a lap left to run, leaving him stranded on the sidelines and thumbing a lift back to the pits from David Coulthard as Schumacher claimed the win. He didn’t take much pleasure in it, however, saying that the win belonged to Hakkinen and that he was sorry for what happened.

Aside from the drama at the front, Juan Pablo Montoya recorded his first race finish with a second place (from 12th on the grid, too), while Jacques Villeneuve delivered the first podium for the BAR team.

2018 Azerbaijan Grand Prix
Sebastian Vettel led much of the way, only for a long-running Valtteri Bottas to grab the lead from him by virtue of running a long first stint and a late safety car which was brought out after the two Red Bulls of Daniel Ricciardo and Max Verstappen crashed into each other. Vettel attempted to retake the lead at the restart but locked up and dropped to fourth, leaving Bottas to take the win. However, at the start of the next lap his right-rear spectacularly punctured after hitting some debris and Lewis Hamilton snatched an unlikely win, having been off the pace for most of the weekend. Kimi Raikkonen finished second while Sergio Perez capitalised on Vettel’s failed overtake to pass him on the next lap and put Force India on the podium for what would turn out to be the last time.

Charles Leclerc finished sixth to score the first points of his career while Fernando Alonso finished seventh for McLaren – an impressive result considering that he’d crawled to the pits on the opening lap with just two wheels left on his car following a first lap scuffle. 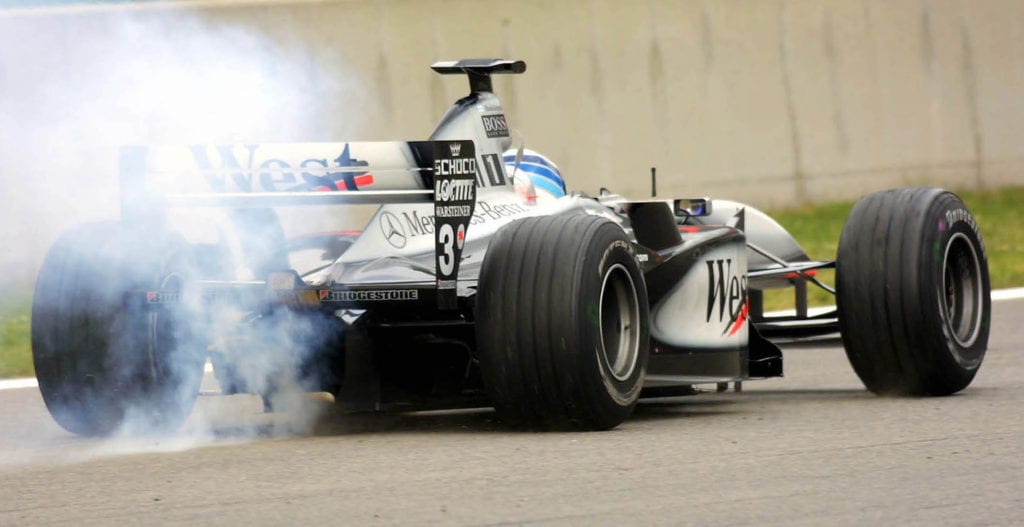