On This Day In F1 – Heidfeld Drove His BMW-Sauber Around The Nordschleife – WTF1
Skip to content
×
Formula 1 , On This Day

1974 Spanish Grand Prix
Ronnie Peterson led the wet early stages of the race but as the track dried out, Niki Lauda claimed the lead and went on to take his first F1 victory ahead of Clay Regazzoni, with Emerson Fittipaldi a lap down in third. Another future world champion, Jody Scheckter, scored his first F1 points with a fifth-place finish.

1991 San Marino Grand Prix
The track was so wet at the start that two drivers spun off on the warm-up lap – Gerhard Berger was able to get going again but Alain Prost stalled his Ferrari and was out. Although the conditions were ripe for Ayrton Senna domination, it was actually the Williams of Riccardo Patrese who dominated the early stages until he retired with electric issues.

That left Senna to lead the rest of the race from Berger for a McLaren one-two, while JJ Lehto finished a fine third for Scuderia Italia, the only podium of his career. It was a good day for the minnows as Pierluigi Martini was fourth for Minardi, followed by the two Lotuses, the only time the team would score all year – Mika Hakkinen fifth for his first career points, Julian Bailey sixth for his only one. Eric van de Poele was incredibly unlucky – he was running fifth for the Modena team when the fuel pump failed in the only race he’d qualify for all season.

1996 European Grand Prix
Jacques Villeneuve won his first race in just his fourth grand prix after beating teammate Damon Hill to the first corner and then holding off Michael Schumacher in the closing stages. David Coulthard finished third for McLaren, while Damon Hill could only muster fourth following a mid-race delay where he suspected his Williams had developed a problem.

2002 Spanish Grand Prix
A day of slightly mixed fortunes for Ferrari as although Michael Schumacher dominated to win the race with a grand chelem, Rubens Barrichello’s gearbox had failed on the warm-up lap. Juan Pablo Montoya finished second and David Coulthard third.

2019 Azerbaijan Grand Prix
Valtteri Bottas led home Lewis Hamilton after seeing him off at the start and then maintaining a small gap until the end of the race. Sebastian Vettel and Max Verstappen weren’t too far behind but neither quite had the pace to challenge the Mercedes, while Charles Leclerc could only finish fifth following a qualifying crash and an alternate strategy which didn’t quite work out. The result meant that Mercedes started the season with four consecutive one-twos, breaking Williams’ record from 1992.

News
In 2007, BMW-Sauber decided to take its 2006 F1.06 on some demonstration laps of the Nordschleife, which had last hosted an F1 race in 1976 before it was dropped from the calendar for safety reasons.

Equipped with super-hard demonstration tyres, short gear ratios and a super-high ride height to cope with the bumps, Nick Heidfeld gave it some beans on a few occasions but had to keep slowing down for photo opportunities, meaning he didn’t get to set a fully representative lap time. Still, it looked cool, though! 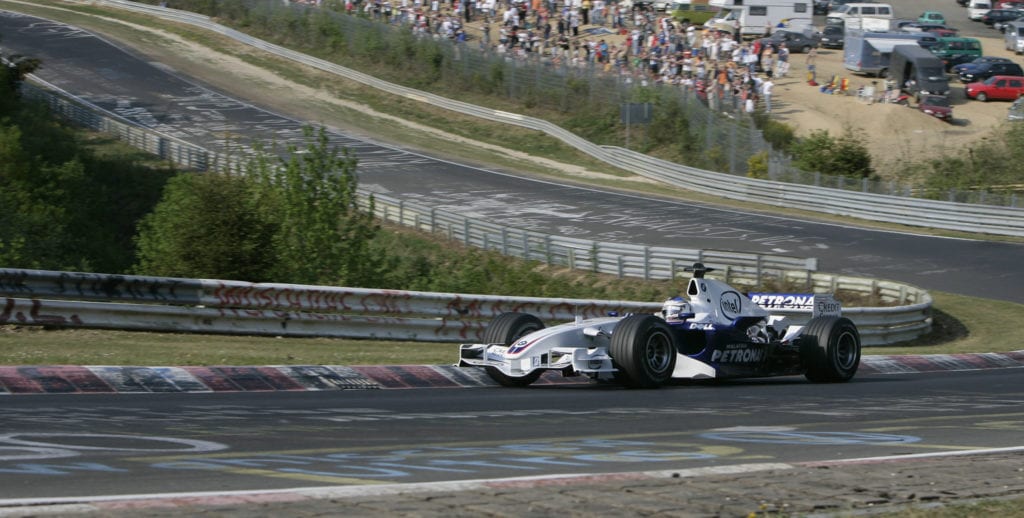